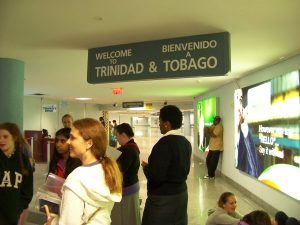 Okay, so more than two words: After yet another day of delays (but fortunately a ton of rest at the hotel), we FINALLY got new boarding passes, went through security, and headed to our gate. It was a miraculous feeling…like we had just reached the finish line of a marathon or something else epic like that.

The girls were free to explore the terminal, grab a quick coffee or bite to eat, stock up on some snack food, and charge up their phones for about an hour. We were all ready to board at 6PM, when we heard the announcement that boarding would be delayed because the plane had been held up a bit. Seeing as this was just a normal occurrence by now, we accepted our fate and waited it out–even making some new friends in the process (a very cute four-year-old girl, a member of the T&T National Steelpan Orchestra, and some fellow stranded travelers). When the call came over the PA for the boarding of our flight, there was much rejoicing. We hopped on our plane, buckled up, and enjoyed the ride…to be delayed yet again on the tarmac due to weather.

Looking at the weather maps on our phones, we realized that we were in some serious trouble if we didn’t take off very soon. There was a huge line of thunderstorms heading our way that would have made it impossible for a takeoff. After saying a little prayer, the engines revved, and we heard the announcement: “Flight crew, prepare for takeoff.” As the plane barreled down the runway, the ecstatic applause of the Princeton Girlchoir echoed triumphantly through the fuselage. If that last sentence seemed dramatic, it was meant to be–after going through so much these past few days, actually taking off for Trinidad seemed like the greatest achievement in the history of mankind.

The flight itself was easy enough–we got dinner onboard (chicken with pasta, or just pasta with pasta if you were a vegetarian), some of us enjoyed “Captain America II” as the in-flight movie (I didn’t), and most of us were just so exhausted that we slept through the majority of the trip. We had no trouble landing, and it was quick and painess gathering our things and exiting the plane. I did notice that for the first time in my entire traveling history, the pilots were not out saying goodbye and “Thanks for flying with such and such airlines” to us. It’s just as well, as I would have been tempted to say something along the lines of, “It’s nice to see you are ‘feeling better’–wink wink, nudge nudge. Thank you for inconveniencing so many people with your lame strike.”

It was then off to immigration/customs. This part was actually a little bit rough–I was the first to go through the line, and was unable to answer the majority of the questions asked of me, trying to speak for the entire group.

Customs: “How many days will you all be here?”
Ryan: “I don’t know–originally we were supposed to be here from the 1st through the 7th.”
Customs: “When are you all leaving?”
Ryan: “I don’t know–due to our travel complications, I think we are still trying to figure that out. And besides that issue, not all of us are leaving at the same time due to travel restrictions of some of the girls.”
Customs: “What is the flight number of your departing flight?”
Ryan: “Seriously? I don’t even know what day we’re leaving…”

We all did our best at answering their questions, and apparently we did well enough because we all made it through. We picked up our luggage (it all made it, much to my surprise–the way things have been going, I was half expecting our luggage to end up in Hong Kong), met our tour guide, got on our busses, and enjoyed the long ride to our hotel…driving on the LEFT side of the road! About 3/4 of the way through the ride, I heard one of the girls exclaim, “OH MY GOSH! I JUST REALIZED WE ARE RIDING ON THE LEFT SIDE OF THE ROAD!” followed by, “Whoa…”

We are now all checked into our hotel–seems to be lovely enough upon first inspection. There’s Wi-Fi, so I’m sure the girls will be mostly happy. I say “Mostly” because you are only able to be logged in on two devices at any time per room, and there are four girls in each room. Hopefully they work out a system. Meanwhile, I’ll just enjoy being able to use my computer and iPad without any potential for roommate drama!

Okay. It’s 3:30. Breakfast ends at 10AM tomorrow, and then it’s off to…I’m not exactly sure. The schedule is in flux, and I know we have a concert with someone in the evening. No need to go into details now, as I’m sure I’ll fill you in tomorrow night!

Menu
PrevPreviousTrinidud or: How I Learned to Stop Worrying and Love Being Delayed
NextIt Was Worth the Wait!Next