Trinidud or: How I Learned to Stop Worrying and Love Being Delayed 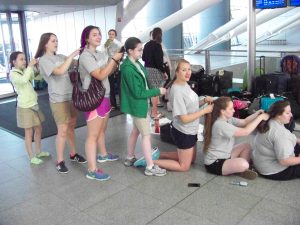 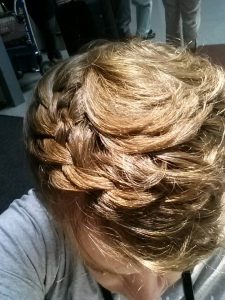 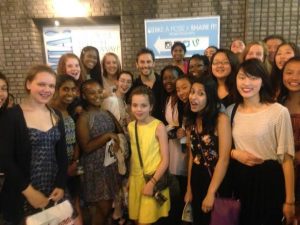 I shall begin with a haiku:

For those of you who aren’t in the loop, we were kept on the ground for the second consecutive day. The day started out optimistically enough–an early morning wake up call at 5AM, including the much-welcomed news that the girls could pick up their luggage in the lobby (this was a surprise for those who fell asleep before the luggage was retrieved last night). Everyone managed to meet right on time at 6AM with their luggage, and we once again headed to the airport. After being dropped off at our terminal, we resumed our post by the check-in counters. We eventually had to move closer to the entrance, due to a massively congested walkway–the Peace Corps, combined with PGC, combined with a ton of young people heading to Israel made for utter gridlock for anyone trying to pass through that particular part of the airport.

When it became clear that our 7:50AM flight was NOT going to happen, we graciously accepted our $12 breakfast vouchers and headed downstairs for a lovely meal courtesy of Caribbean Airlines. Because we had lots of time this morning, many of the girls opted to eat at the diner. While most girls chose traditional breakfast foods, I know that a few supplemented their breakfasts with ice cream sundaes. In their defense, we had been up so long that it might have felt like they were eating lunch. Always sociable, the girls met some nice ladies from South Africa (who were in the States for the sole purpose of “shopping”–must be nice!) and got to learn more about the songs from South Africa which are in our tour repertoire. As they eventually began to trickle back upstairs, they joined together in a rousing round of “The Animal Game” (I missed this because I was watching the second set of the Murry vs. Dimitrov Wimbledon match). This eventually changed gears and became the largest game of “Apples to Apples” in which I’ve ever taken part, making for some very interesting word combinations.

Because we were STILL waiting to hear more information about the flight that was supposed to be heading up from Port of Spain to pick us up, we decided that maybe it would be fun to go sing for the Caribbean Airlines folks at the ticket counter. When we got closer to that part of the airport, we realized that might be seen as a security risk and decided to not jeopardize our good standing with security. Heading back to our little spot, it was decided that braiding each others’ hair would be our next group activity. With chains of girls (I think the most I saw in a row at one point was NINE) braiding hair, we were quite a sight to behold! With a little bit of encouragement, I decided that I should also get in on the fun times and offered my head of hair as a canvas for their hair styling artistry. I’m happy to say I received a very tasteful “crown” of braids, tied off in the back with a borrowed hair tie. I wore it with pride for the rest of the morning, and didn’t pay any mind to odd looks that strangers might have been giving me.

As the morning quickly became afternoon (and still no word of our special flight), a large amount of the girls returned to the hotel to eat another comped lunch. They returned to the airport just in time to find out that we finally had a confirmed flight time: 10:30 AM on Thursday morning! Thankfully, Miss Butler and our tour coordinator were able to make some awesome plans for us that softened the blow: a return to the hotel, followed by getting dressed up (always a fun thing for the girls!), followed by a bus ride into Manhattan for dinner and a Broadway show! This more than satisfied our desire to do something rather than continuing our never-ending idling at the airport.

We got on a party bus (featuring the sweet stylings of “Wicky wicky…Stefan the DJ…scratch scratch”), headed back to the hotel to get changed, and then headed into Manhattan for a nice Mexican buffet at Chevy’s. The original plan involved heading into Times Square for a little while, but Mother Nature had other plans that involved flash flood-inducing rain and dangerous lightning. 15 minutes to show time, we braved the storm and made our way over to the theater to see “Mamma Mia”. For some of the girls, it was their first Broadway show–and it was a very entertaining one at that! For those of you that don’t know, the music in this show is all ABBA tunes–capped off with three rousing encore renditions of the classics “Mamma Mia”, “Dancing Queen”, and “Waterloo” that had a good chunk of the audience dancing in the aisles. Afterwards, we met, got autographs, and took pictures with some of the cast members by the stage door. It was one of those experiences that made us all forget that we were actually supposed to be in Trinidad…

The girls have been incredibly flexible and awesome sports through all of our travel issues. It really is inspiring to see that no matter WHERE we are, or WHAT we are going through, these girls stick together and are able to have an awesome time. I was remarking tonight that if we were having this much fun in our own back yard, imagine how awesome it will be if/when we actually get to Trinidad! Hopefully tomorrow night I’ll be writing about what that’s like!