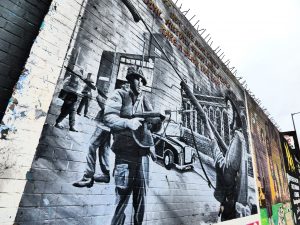 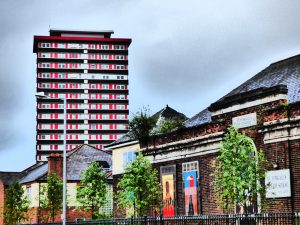 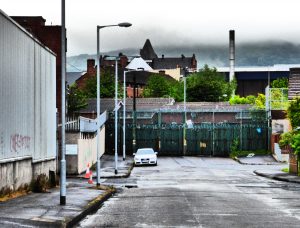 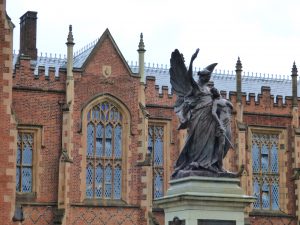 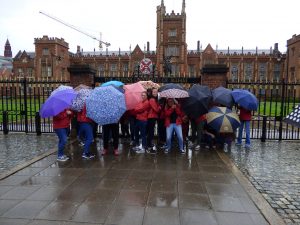 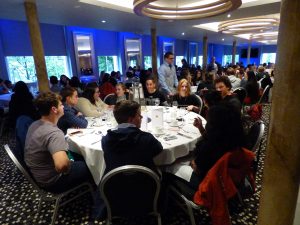 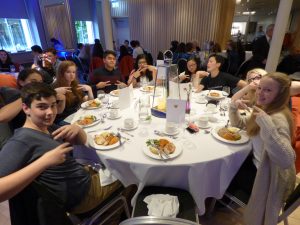 You know, considering how rainy today was, it really didn’t seem to bother most of us. It kind of fit the mood of this morning’s subject: The Troubles.

We took a bus tour through a part of Belfast we hadn’t yet seen, all the while learning about the time period between the 1960’s and 1990’s where the entire city was basically a war zone. We learned about the political conflicts between the Irish nationalists (mostly Catholic) and Irish unionists (mostly Protestant) that turned deadly in the 1960’s, as well as figures and leaders from both sides–most notably Bobby Sands, who died during a hunger strike in protest of his status as a criminal prisoner (though not before being elected as a member of Parlaiment!). It was very strange to me to see murals of this man who was a member of the IRA, a group that is considered to be a terrorist organization, as well as the other nine IRA members who died in that same hunger strike. The whole area that we visited was just a little bit…off. There is still a wall that separates the Protestant and Catholic neighborhoods, with iron gates that are still closed at times because of tensions that still exist. There are still walls covered in murals painted by amateur artists that have barbed wire at the top. It felt very exclusive, though not particularly dangerous (I went walking through the area this evening on my own). It was just strange to see the remnants of such a conflict that was (and still is) much more complex than the simple Catholic vs. Protestant explaination that we’ve been fed in the past. Our tour guide somberly reminded us that if we had been riding through a unionist part of town 20 years ago, our bus would have been attacked due to our license plates being from a jurisdiction that was nationalist–which is pretty scary to think about. Belfast has come a long way in 20 years.

This day wasn’t a total downer–in fact, the bus tour itself wasn’t even a total downer! We made a stop and posed for some group shots at The Queen’s Univeristy of Belfast, braving the rain. After a short ride back into the center of town, we were off to an early lunch on our own. Many of the girls took the extended amount of time to do some shopping in the local stores, though because of the rain we weren’t quite as adventuresome as yesterday in the distance traveled. A LOT of coffee was consumed, as it was much needed–a whole section of girls fell asleep on the bus during the tour, experiencing jet lag. After lunch, we headed back to the bus and made our way to St. Patricks Church for our first festival rehearsal.

The girls were very excited to meet and work with three other choirs–two of them made up of similarly aged students from Australia, and one of them made up of the 11  bravest people on the planet: a group of singers from Georgia whose average age seems to be around 70, give or take a few years. We all seemed to get along very well, and our girls were especially excited to work with some BOYS–but only from a musical standpoint, I’m sure! A choir with REAL tenors and basses is a new experience for many of our girls; a choir with tenors and basses who all have Australian accents sweetens the deal! Our festival conductor, Dr. Janet Galvan, was energetic and engaging throughout the entire three-hour rehearsal, as were our girls. We all really know how to work, and it’s paying off beautifully in the sound.

After rehearsal, we took a quick stop at the hotel to drop off our things and then piled right back onto the bus for a short ride to our dinner destination: the Ten Square Hotel. Accompanied by all of the festival choirs, we had a great evening of making new friends. Each table had a mixed group of all of the different ensembles (well, aside from our Georgian friends who seemed to be a little bit intimidated by our collective volume), and it was wonderful to see and hear the kids having so much fun together–some of them even sharing clothing (some non-PGC children were seen sporting our red PGC jackets as they mingled through the banquet hall!). As for the food: my goodness, are we eating well on this trip! I should have mentioned that we had a FANTASTIC breakfast at the hotel this morning, aside from the coffee (or lack thereof). Dinner followed suit in its amazingness–wonderful vegetable soup, chicken with a few different types of potatoes, yet another amazing cheesecake, and in my case (but no one else’s–the perks of being the festival accompanist!) the national beverage of Ireland. At this rate, I’m going to have to go for a long walk every night of this trip! So far I’m 2/2.

I’m not sure what happened after the girls returned to the hotel, as that’s when I made my way back into the troubled part of town. I’m assuming that they took advantage of the extended hours at the swimming pool. Maybe some of them went to bed…but probably not. We’re having too much fun to go to sleep, which is probably why I’m sitting here at 1AM wide awaking and writing a blog post. 😛 I guess I should hit the hay. Hope you all had a wonderful July 4th!