Quarter Notes Rises to the Occasion 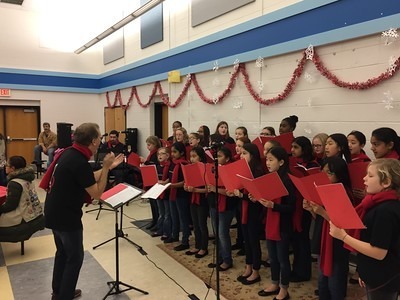 EAST WINDSOR – If you were looking for a party, Melvin H. Kreps School in East Windsor was the place to be Dec. 10 as Rise, a local non-profit organization, hosted its 50th holiday party and gift giveaway.

And it turned out to be the group’s biggest party yet.

The cafeteria at the school was transformed into a winter wonderland, and there were wall to wall people, all in festive moods ready to celebrate. In the distance that familiar sound of Christmas music could be heard. The smell of cookies, cakes and coffee filled the air. There were presents abound, and even a big comfy chair and Christmas tree, where “you know who” would later appear.

None of these festivities would have been possible without the countless men and women who gave of their time not only on this day, but also the weeks and months leading up to the big event.

Leslie Koppel, executive director at Rise, explained that the party has become what it is because of the generous organizations that add their piece to the equation.

Of course there is Rise, which runs a gift-giving program where families register their children with a “wish list” of what their child may want for Christmas. Upon registering and income verification, the child gets added to the list and issued a number, which then coincides with a donated gift from a person or family who wishes to donate. The efforts begin before Thanksgiving and culminate at this annual event.

This year, Rise and donors handed out 933 gifts, the most ever for this event.

Much of the food and crafts were supplied by the Junior League of Greater Princeton, an all-women organization whose purpose is to work for the benefit of the community through fundraising events and various programs focusing primarily on women and children issues. They provided bagels, cookies, cakes, plenty of beverage, and crafts such as face painting and drawing stations. This was the 13th year that the JLGP took part in this event.

Some of the music was supplied by the “Quarter Notes,” which is one of the choirs of the Princeton Girlchoir, an organization founded in 1989 as an after school music program. The program has grown to more than 300 girls, living in five different counties. They were conducted by Fred Meads, and added a musical quality to the holiday atmosphere by singing some of the Christmas Classics.

The East Windsor Education Association also had books and candy that they handed out to party goers. According to Esmerelda Garcia, these items were acquired as part of the F.A.S.T. program for the sole purpose of being able to give these items away at this holiday party. The mission of this organization is to promote a quality system of public education for all students. They take part in the Rise holiday party every year.

Another key participant in this year’s event was the mother-daughter combination of Maria Cunningham, and her daughters Juliet, 17, and Emilia, 13, who are the founders of Jingle Jammies. They collect pajamas throughout the year to give away to children who need them.

In their fourth year of operation, Ms. Cunniingham explained that it started out as a small idea that she and her girls could do as a “positive activity,” but has garnered a following. What started out as passing out a few fliers quickly grew into a social media wildfire that has picked up momentum. This year, Jingle Jammies gave away 213 pairs of pajamas at the holiday party.

And of course, there was Santa. As soon as Santa and Mrs. Claus made their appearance, the line formed immediately. Seemingly every child in the room took an opportunity to get a picture with Old St. Nick. Many of the younger children became fixated on the man with the white beard as they got closer. No matter how long the line became, there wasn’t a complaint in the house, because Santa had come to town.

With so many volunteers and organizations, the Rise Holiday Gift Giveaway was a smashing success according to those involved.

For more information on Rise, or to learn how to donate, visit its website at http://www.njrise.org/.