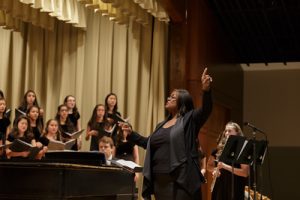 Think about the title “Princeton Girlchoir.” Misleadingly, it appears to name a single ensemble. To the contrary, Princeton Girlchoir is a 285-girl enterprise consisting of six separate choirs, varying in their musical accomplishments and ranging in size from 27 to 71 girls. Artistic director Lynnel Joy Jenkins oversees the operation. “United in Song,” the winter concert combining all six choirs, takes place Sunday, January 22, at 6 p.m. in Princeton’s McCarter Theater. Conductors for the performance include Jenkins, as well as associate conductors Fred Meads, Melissa Keylock, and John Wilson. The entire performance will be recorded and made available as a download from the web.

“I look forward to this concert each year with great anticipation,” Jenkins says. “It is such a joy to experience the girls’ artistry and poise, which is as present in the beginning group, ‘Grace Notes,’ as it is in the most advanced group.”

The January 22 program presents selections by each choir separately and culminates in a joint performance of Paul Simon’s “Bridge Over Troubled Water,” as well as a performance of Benjamin Britten’s “A New Year Carol” by the combined choirs and alumnae. Instruments included in the concert are percussion, violin, and flute.

Pieces to be performed range from a baroque “Laudamus Te” to area composer Brian Katona’s “I Hear Music,” published in October, 2016, and “Hallelujah,” perhaps the best-known piece by Canadian Leonard Cohen, who died in November. Katona was inspired to write “I Hear Music” by the West Windsor third grade class that his children attended in 2015-’16.

Choir members range in age from 8 to 18. Selected by audition, they come from more than 75 schools in central New Jersey and eastern Pennsylvania. Participants perform in up to 20 concerts during the year, depending on the level of the choir in which they participate.

At separate weekly rehearsals for each of the choirs from September to May, they master increasingly demanding musical skills as they move on to a more advanced choir. While the Grace Notes, the youngest group, may sing in one of two parts, members of the Semi-Tones, two levels more advanced, sing one of four parts, and the Ensemble, a selected choir, is expected to be able to switch parts.

The Princeton Girl Choir dates from 1989, when Janet A. Westrick, then a member of the music faculty at Princeton Day School, started the group as an after-school activity for a small number of girls interested in choral music. Having retired in 2009, she now serves as parish musician at Christ the King Lutheran Church in Kendall Park and is a member of the board of directors of the Trenton Community Music School. Jenkins succeeded Westrick in the fall of 2009.

Westrick and Jenkins share a background in the child-centered approaches of German pedagogue Carl Orff and Hungarian pedagogue Zoltan Kodaly. Using experiences familiar to young children, the two composers/teachers encouraged creativity by drawing on the links between music and movement. “Orff and Kodaly provide a strong musicianship background,” Jenkins says. “They inspire our teaching techniques to support development musically, vocally, and artistically.”

Jenkins, whose day job is choral teacher at Timberlane Middle School in Pennington, has earned degrees from Temple University and Westminster Choir College of Rider University. Her most recent academic achievement is a doctorate, with a major in choral conducting and a minor in pedagogy, from the University of Arizona, conferred in December, 2016. “The degrees have provided various approaches to choral music making and pedagogy,” she says. “Working at all three institutions has provided a way to enrich my approach to choral conducting.”

As a conductor, Jenkins has directed boy choirs, as well as girl choirs, and finds that there are no significant gender-based musical differences, for the most part. “There are common denominators in boy choirs and girl choirs until the boys’ voices change; then there’s a physical difference,” she says. “Boys and girls in quality choirs share a commitment to their art and craft and to excellence in singing.”

While the sound of particular choirs varies, Jenkins finds that differences depend less on the intrinsic characteristics of the choir participants than on what their leader brings forth. “The sound of a choir varies with the conductor,” she says.

Jenkins likes to cultivate the intrinsic capabilities of voices she deals with, rather than shaping them to meet external criteria. “I aim at the natural beauty of the voice,” she says.

Jenkins searches for sounds that vary from piece to piece. “The sound sought depends on the piece,” she says. “It’s important to cultivate the sound appropriate for each piece. There’s a difference, for instance, between a gospel piece and an aboriginal Australian piece, where a nasal sound is appropriate. And a renaissance piece differs from a contemporary piece.”

Benefits of participating in the Girlchoir extend beyond music, Jenkins believes. The girls develop a trust and respect for each other that is independent of their level of musical accomplishment, she says. “Each fall Quarter Notes, [the choir on the second rung of musical expertise] and the Ensemble [a selected advanced choir] work together to present a program. Both learn from each other. This fall the theme was ‘What a Wonderful World,’ and the Ensemble sang music from the Brazilian rain forest. The younger girls proposed that there be more bird-like sounds in the performance, and the older girls made the change. It was pretty transformational.”

Jenkins was born into a musical family in Philadelphia with a choral director/organist mother married to an auto mechanic. The youngest of four siblings, she says, “Music started at home for us. It was there from the time I was born until now. There was instrumental music, vocal music, and choral music.”

The family is large, close-knit, and supportive, Jenkins says. “There are 40 of us for Thanksgiving. They’re my number-one cheerleaders.”

The family plays a constant role in Jenkins’ sparse spare time. With weekdays committed to teaching and Girlchoir rehearsals, and weekends devoted to performances and Girlchoir administration, she says, “I look for a balance. I want to find quiet time, spend time with my family and friends, and work on my health. It’s a challenge.”

“I try something new every month,” Jenkins says. “This month it’s a hip-hop dance class. I’ve done hiking, kickboxing, and zumba. I go month by month.”

Jenkins finds that reading gives her a respite from her heavy work schedule. “That’s how I unwind,” she says. “Right now, I’m reading a book about choral conducting.” I point out that choral conducting is a professional activity for her. She replies, “Yes, but I didn’t have to write the book.”