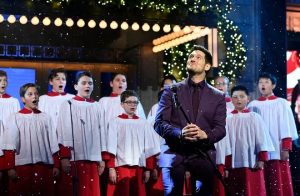 Members of Princeton Boychoir, currently celebrating their 5th Anniversary Season, were honored to appear with Michael Bublé in his recent NBC special, Christmas in the City, which aired on Monday, December 6. Ranging in age from 9 to 13 years old, this talented group of boys joined the famed Canadian singer, often referred to as the modern “King of Christmas” for his concert finale, a rendition of the classic carol Silent Night.

The performance was heralded in the press and on social media as “angelic” (decider.com), “simply beautiful,” “magnificently sung,” and “perfection.” Twitter user Ryan Bartholomee raved “That performance of Silent Night was pure magic and what we needed!”

You can catch the performance again when NBC rebroadcasts Michael Bublé’s “Christmas in the City” special on Tuesday, December 22 at 10pm, or streaming on Peacock and NBC.com.

Princeton Boychoir is currently auditioning boys from 3rd through 12th grade to join the choir in January. For more information, visit PrincetonBoychoir.org or call 609.688.1888.

The Boychoir is a program of Westrick Music Academy, home to Princeton Boychoir, Princeton Girlchoir, and other music education classes for musicians from kindergarten through adulthood. The academy is also enrolling 1st and 2ndgrade singers in Poco Voce, and girls from 3rd through 12th grade in Princeton Girlchoir to begin in January.