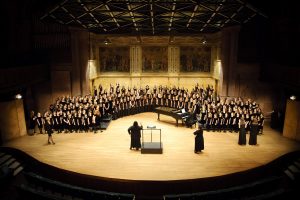 This season Princeton Girlchoir celebrates 25 successful years as an organization that has fostered the love of singing in young girls. The season will culminate in an historic 25th Anniversary Celebration concert on June 1, featuring performances by all six of the choir’s ensembles, with a special appearance by a choir of alumnae from across the country.

To commemorate this special anniversary, composer Ryan Brechmacher was commissioned to create a new work for the choir.  This delightful composition titled A Life of Song, which also happens to be the theme of the celebration, embodies what Princeton Girlchoir has meant to its many choristers over the years.  Since its inception in 1989, by Founder and Artistic Director Emeritus Jan Westrick, Princeton Girlchoir’s leadership has nurtured and supported girls to thrive and blossom into confident, empowered young women through music.

This element of transformation is a central part of Princeton Girlchoir’s success as an organization. As Lynell Jenkins, Artistic Director and Conductor of Concert Choir notes:  “I like to see our art be a verb.”  Her emphasis on the active, vibrant aspect of art, the “ing” of singing together sharing experiences, and learning together is crucial to the experience of the choristers.  This idea of young girls engaging in artistic activity that is dynamic, alive and open-ended allows for growth on many levels because Art, in this case, making music, is a beautiful, fluid process not a static form.  As the choristers gain proficiency in their art and move into more advanced choirs, they also grow intangibly, in their creativity and their spirit.  To quote a line from the newly commissioned A Life of Song: “Music fills my heart, grows my spirit to be strong.”

Princeton Girlchoir’s growth is evident in their work and reputation as one of the country’s premier training and performance choirs.  Highlights of the year include singing for both the Honorable Hillary Rodham Clinton and the Honorable Sandra Day O’Connor, performing the national anthem at the Jets game, and the choir’s premiere performance at Carnegie Hall.  The choristers have also had performances in Massachusetts, Delaware, Pennsylvania, New York, New Jersey, and will end the season with an upcoming summer tour to Trinidad.  An impressive record for an organization that started as an after-school activity with 27 girls and now has more than 500 alumnae across the country and around the world.

Many of these alumnae will travel to Princeton to sing once again as part of the Princeton Girlchoir with the alumnae choir at the 25th Anniversary Celebration. This concert promises to be a delight for audiences of all ages.  Listening to the Girlchoir is always enjoyable; as Ryan Brechmacher observes: “Everybody in the organization seems to embody the joy of making music together….it makes me want to keep coming back.”

The concert will take place Sunday, June 1, 2014 at 4:00pm at the Patriot’s Theater at the War Memorial in Trenton, 1 Memorial Drive, Trenton, NJ.

Tickets are available at www.princetongirlchoir.org or by calling 866-967-8167.

For further information on the concert or auditions for the coming season, please contact Princeton Girlchoir at 609-688-1888, or visit www.princetongirlchoir.org.

More About the Princeton Girlchoir

The choir that Founder and Artistic Director Emeritus Jan Westrick started in 1989 as an after-school activity for a small number of girls interested in choral music has grown into the area’s premier training and performance choir for over 250 girls aged 8 to 18. To date, Princeton Girlchoir’s alumnae number more than 500 young women, many of whom continue to sing in their schools, churches, communities and on professional stages around the world.

We are a family of six choirs, beginning with third-graders and including girls through their high-school years. Choristers from towns throughout Central New Jersey and Eastern Pennsylvania come together each week from September through May to rehearse, and they perform some four to twenty concerts throughout the year, depending upon their choir level. Members of the Performing Division choirs may also take part in the annual summer tour.

Fueled by the power of a girl’s voice, Princeton Girlchoir presents extraordinary performances at home and throughout the world, while educating the musician, building confidence, and fostering a life-long love of singing together.