It Was Worth the Wait! 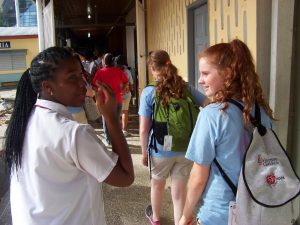 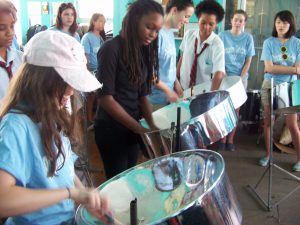 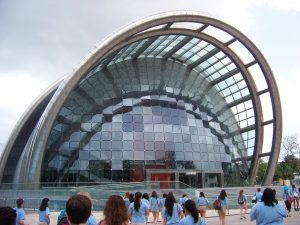 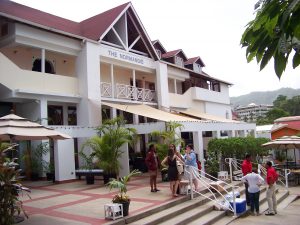 So after the first full night of sleep I’ve had in the past four days, a nice breakfast and coffee at the hotel, and a shower (more on that in a bit), I’m back in the business of writing the tour blog. I apologize for last night’s exhaustion!

Yesterday started a bit later than we had originally planned, due to the very late arrival time from the night (actually early morning–3:00AM) before. The girls were appreciative of an extra hour of sleep–I was too. I had noticed on the welcome information from the hotel that they had said they were under renovations, which might cause the hot water to take a while to kick in. I don’t know if anyone else had the same problems as I did, but no less than a minute after stepping in my shower, there was zero water pressure and my shower had become more of a pathetic drizzle. For some reason, it seemed the water to my room had been completely shut off. If there’s anything this particular trip has taught me, it’s that sometimes in life there are setbacks and that in the end everything will be okay. I just shrugged it off, got dressed, and headed to breakfast.

Breakfast here is actually pretty good for what it is–a small continental breakfast with eggs, sausage (actually, little hotdogs with peppers yesterday), pastries/bread, cereal (but “The Froot Loops are NOT real Froot Loops, and the milk isn’t cold,” said one girl–oh well!), fruit, coffee, and juice. There was a similar menu this morning, minus the sausage and adding fried plantains. We all ate up, put on our sun screen (oh my gosh the sun is brutal here!), and enjoyed the daytime view of our lovely hotel. Once the busses arrived, we all got on and were off for a morning driving tour of Port of Spain.

We quickly learned that our hotel is right next door to an important residence–the sprawling home of the Prime Minister of Trinidad! Not a bad neighbor to have, I suppose! The drive around the city took us by some of the points of interest in Trinidad: the new Performing Arts Center (“We let them build the opera house in Sydney, and then built one that was better here!”); a monument with a plaque dedicated to those who gave their lives in the two World Wars (“Notice how big the plaque is (approx. 2′ x 3′)–when wars happen, we don’t really get around to actually fighting”); a cool statue of Trinidad’s cricket hero Brian Charles Lara; Trinidad’s Twin Towers (the Central Bank of Trinidad, featured on all of the paper currency here); the KFC (ironically enough, the highest-selling KFC in the world according to our tour guide); a street protest (none of our tour guides had any idea what they were protesting, but it looked like fun–a pretty festive and musical atmosphere); the National Library of Trinidad and Tobago (“Actually, it’s pretty much just the ‘National Library of Port of Spain'”); the Red House, where the national government is housed; the Hall of Justice (“If you never want to leave Trinidad, just do something to end up here–it’s free to stay!”); and various schools in the area. If you couldn’t tell, our tour guide was a jokester, although some of his jokes went over the heads of some of the girls (his story about “Stick fights”, for instance). He also warned us about the spicy foods, especially the peppers, in Trinidad. “Stay away from the scorpion peppers here–they will make your mouth seem like you’re a dragon, and later on it will turn you into a rocket!” was his advice. Duly noted.

Our driving tour ended up at the National Museum of Trinidad and Tobago. The museum explored everything from the wildlife (there are centipedes that are nearly a foot long, huge leatherback turtles, and “man-eating alligators”–if you want to hear an entertaining/slightly graphic story, ask your girls about the man-eating alligators!), the history of the peoples (from Columbus, to slavery, to the multiple cultures that have ended up here), and industries of the nation (oil, Angostura bitters, etc). It was a very interesting museum, and our tour guide was very knowledgable and entertaining in his delivery of the plethora of information.

After the museum, it was off to a local food court (not attached to a mall–just a random building with four or five different restaurant options) for lunch. We were all eager to try the local cuisine, albeit a bit hesitant when we found out we’d be eating spicy chicken (after hearing the tales of dragons and rocketry). Those of us who had the chicken were impressed with how spicy it was, but it wasn’t unbearable. Those who had the fish also enjoyed it, minus all of the spiciness. While at lunch, we met lots of interesting people–everyone is very friendly here and interested in who we are and what we’re here for. I personally talked to a couple of locals for no less than a half hour, and we talked even more about their culture–from the justice system to their healthcare system, it was pretty eye-opening. Once lunch was done, it was off to the Bishop Anstey High School.

We were greeted by their choir, and then split up into two groups–one group would be doing a musical exchange (singing for each other and teaching new songs), while the other group got to try their hands at steel pan playing! This was a very cool experience–by the end of our time together, we had mastered a four part arrangement of the first phrase of “Twinkle Twinkle Little Star”. Likewise, the musical exchange was a success, with their choir successfully learning “Bring a Little Water Silvy”, and our choir learning “Cries in the City”. After a great time, we all had dinner together and got the chance to socialize even more. It was a wonderful time getting to know our hosts even better, and I’m certain the girls made a whole lot of new friends–by the end of the evening, many of our girls and their girls were already following each other on Instagram!

After dinner, we got on the busses again and headed through a less than stellar part of town (read: a lot of poverty here, guards with machine guns, goats on the side of the road–stuff we are not used to seeing in Princeton, but sadly not that rare in the rest of the world), up the side of a mountain (it reminded me of my drives through the Hollywood Hills–narrow roadways, winding roads, and some spectacular views–but the housing wasn’t quite so nice), and finally arriving at the beautiful Mount Saint Benedict church. We did a quick sound check, got changed, and then experienced a great concert. It was very interesting hearing traditional classical repertoire accompanied by a steel pan orchestra–but oddly enough, it worked beautifully.

I am not exaggerating when I say this: When it was our turn to perform, from the first note to the last, it was as if all of our struggles to get here melted away, and in the end all of the troubles we have been through to get here were worth it. The girls sang with a new sense of purpose, a new depth of understanding, and a more captivating stage presence than I have ever experienced with them. It was truly an honor to be a part of last night’s performance.

The concert ended with the two songs we had taught each other in the afternoon, and after a nice snack, we headed back to the hotel.

Well, I’ve got to go catch a bus now. I look forward to sharing today’s experiences when I get back tonight!