GOOOOOD MORNING!! It is currently 5:50 and we are sitting downstairs in the hotel restaurant again, just like yesterday. Figured I may as well start this earlier today so I remember all of the details. Today is SO hype we are going to perform at Pearl Harbor, but that meant we had to get up early again. I am absolutely exhausted from yesterday, but so excited to do all the fun things planned for today. The food is here and is the same as yesterday (yes, the potatoes SLAPPED again). This morning while we got ready I felt like a truck hit me and I could barely open my eyes, however, the food is helping a lot. I’m on Djim the Djembe duty for the trip and last night Ms. Butler told me to bring him to breakfast because he had to go through security. YES you heard that right, the Djembe had to go through security before we got there. When she told us (Maddi, Sabrina, and I) we all started hysterically laughing. I’ll keep y’all updated when I get the chance again!

HELLO AGAIN! We are currently on the bus to Pearl Harbor. Our tour guide Gill is telling us all about the infrastructure we pass and the history. It is super interesting, but thank god Reanna is right next to me because I am so tired from last night I was about to fall asleep. Her jokes are keeping me laughing instead of snoring. We stopped at the punchbowl memorial to pay our respects from inside the bus. Gill said we aren’t allowed to get off the bus anymore because it is closed to the public. We also stopped at the Merry Monarch statute which was right next to the supreme court! Another thing we learnt that made us all giggle was that Pu Pu (pronounced Poopoo) means appetizers. Anyways readers, we are at Pearl Harbor (ttyl) Talk to you later!

We are at Pearl Harbor!!!!! We had our first concert “Maybe we can sleep sing” Aisha said after we got off the bus. We had like 15 minutes to wait until our concert started, so we all just used the bathroom and met back up again. After our first concert, we went to explore the museum, we saw some amazing letters and historical artifacts. There was even a letter where someone was proposing to their girlfriend! Anyways, next we headed to eat our lunch and then off to the USS Arizona. We went on a boat to see the final resting place of over 1,000 brave military men who gave their lives on that fateful day- 12/7/1941. The experience was humbling and gave us all a renewed meaning to why we sing. 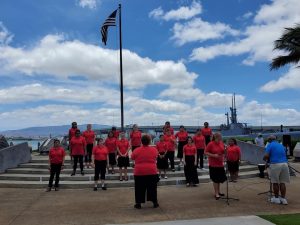 Soon, it was time for our final concert and, in our opinion, we gave it our all. Our learnings from the day translated into our performance, giving it a depth that the other concerts did not have.

Eventually, we ended up back at the hotel with a little bit of free time before dinner. While the older girls did their secret, older upperclassmen things, the rest of the bunch chilled in the hotel rooms. In Sang’s and Emilia’s room, they realized that Sierra not only plus the oboe but also can sound like one too. At around 6 PM, we all walked down to the Japanese Steakhouse. The wide seating arrangements made it feel like the was a ocean between us but that did nothing to deter PGC’s communication skills. We’ll admit, we were loud, but our collective giggles were worth it. We had the most immaculate conversations, but Dr. Jenkins face when the fire abruptly came up in front of her took the cake.

The food was amazing and we had so much fun. Having said that, the some tables were having a period of deliriousness from the early morning. Now we’ll have you know, our actions are excusable. Ms. Butler went to the bathroom and then came back to the table and told us how cool the toilets were. We HAD to check it out. Sabrina and Sangeeta went to the bathroom and we had an informative experience. The toilets had fancy Japanese bidets. They were fascinated by the different buttons and the accompanying functions some of which were a little bit scary and enticed a fit of giggles and shrieks. Back at the table, Sabrina and Sang shared their wonder with the rest of the gang, barely able to conceal the laughs. Naturally, a majority of our party ended up in the bathroom, ooohing and ahhing over the wondrous invention. Our uncontrollable laughter led to an executive decision by Ms Butler to have lights out at 8:30 PM. In retrospect, it was very much needed. We all went to our rooms and fell asleep

Tour isn’t just about singing, it’s about experiencing new cultures and expanding our knowledge so we can utilize it in our music making. Today was a perfect example of that.