Good morning, evening, or night depending on where you are right now! (full transparency the time zones have me messed up)

Today had so many fun events it kind of felt like three days in one.

We got up as Maddi said groggy, “before the sun was in the sky”. We had to be downstairs for breakfast by 5:45 which meant we were not as rowdy as other breakfasts. Today instead of going out for breakfast, we went to the restaurant inside the hotel, when we sat down there was a paper waiting for us and we got to choose what we wanted from their options. The potatoes SLAPPED, were absolutely killer and from what I have heard the pancakes were just as good. That breakfast was so important because it helped us fuel up for the long awaited Diamond Head hike. 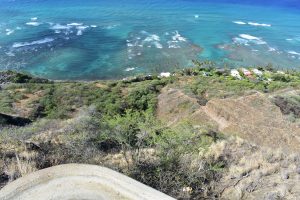 We took a short bus trip to Diamond Head and then got started on our about 1.5 mile hike. Starting the trail was not as easy as we had hoped and as Sabrina so eloquently said, “Oh god I am already out of breath” and another person on the way back passed us and said, “It gets easier!” to which I am not sure if he was right. The uphill hike was pretty easy (okay you got me, we were slightly out of breath) until the first set of stairs came. 99 steps. NINETY NINE STAIRS. We got up and all our water bottles were finished to the last sip. Then we came across this tunnel which gave us some shelter from the strong sun coming down on us which was great! Little did we know awaiting us was another flight of stairs with 76 steps this time. Having said that the pictures were STUNNING. So worth it. I think half of our drive came from getting good Instagram pics and the other half came from getting our steps in. We spent a nice amount of time capturing the beauty of the view and mustering up enough energy to go back down. 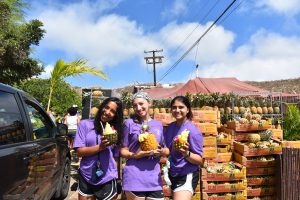 However, the hike down was SO much easier and MAYBE the thought of eating dole whip in pineapples at the end.

Anyways, after the breathtaking hike and almost silent drive back to the hotel we all grabbed some lunch and headed to the pool. While Julia wanted to, “play mermaids” and Sangeeta wanted to sing ’Siyahamba’ as a flash mob in the pool we all were happy to just cool off and relax from that long hike.

If you think this blog post is almost over, you are in for a treat because at this point it was only 2:00.

After that relaxing time, we were all SO hyped to wear our own clothes to dinner tonight. BUT first we had a short rehearsal in preparation for our performance at Pearl Harbor tomorrow :). 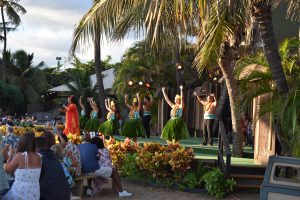 Anyways… when Ms. Butler and our tour guide Gil told us dinner was luau we definitely did not expect all of the fun were going to have. Even though the bus ride was a little long (like an hour), everything was so worth it. We walked in and there was a whole event: a lot of tables, drop dead gorgeous scenery, and a stage with someone welcoming us all. All of us turned to each other, jaw dropped in awe. It was incredible. First things first, grabbed some food, there was a salad to pick up on the way to our tables. Then we took some pictures (did you expect anything else, after all we are teenagers). 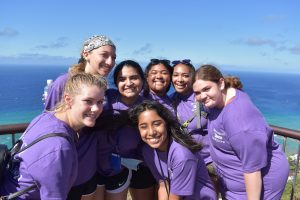 After, we got some food which was good, but not as good as the view. BUT once again there is more the narrator was getting us all hyped on the stage and then the show began. From dancers, to more Hula, to story telling, to the ABSOLUTELY DOPE costumes, to the man who was throwing fire up, down, left, and sideways, we were STUNNED to say the least. And there are pictures of those performances below too! Anyways, then we drove back to the hotel and now yeah here we are. Today was so chaotic but SO SO SO much fun! Tune in tomorrow to see how our Pearl Harbor performance goes. 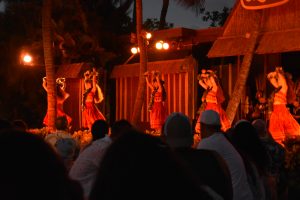 Thank you readers peace out, Amenah <3