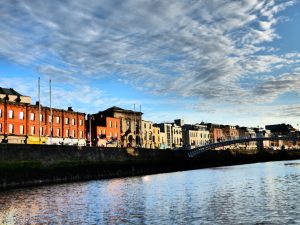 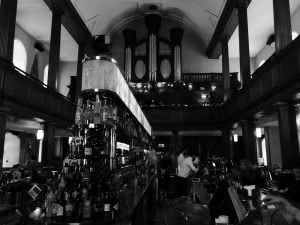 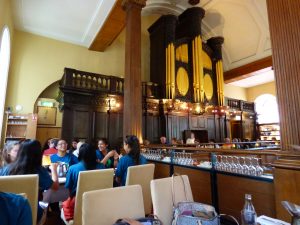 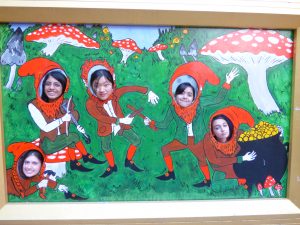 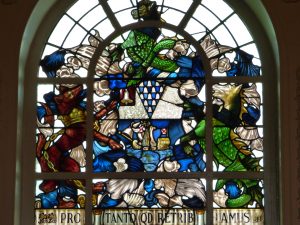 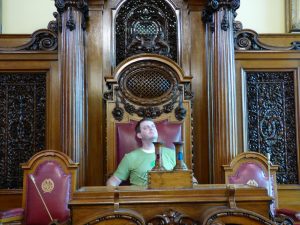 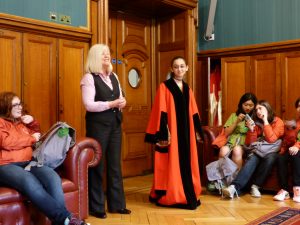 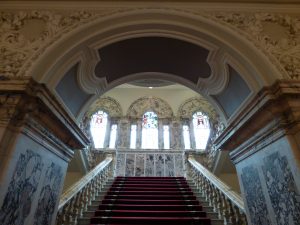 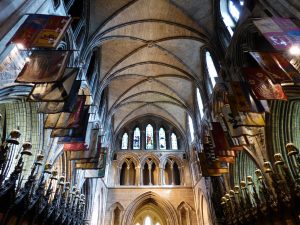 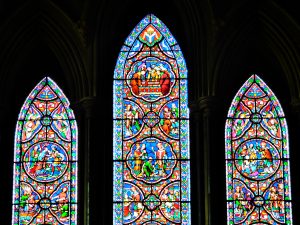 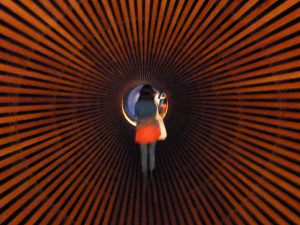 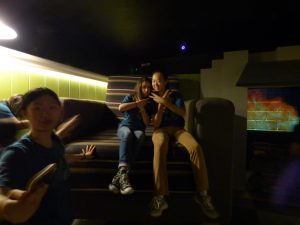 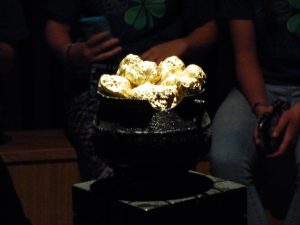 Hello from Dublin! I’m once again up late writing the blog after another eventful day that should have exhausted me; alas, I’m restless as usual. Lucky for you, I’ve got a lot to write about!

I suppose I should start with yesterday, seeing as I didn’t really post a summary of the day’s activities. I need to look through my photos to even remember what we did–it seems like ages ago! We started the day by heading over to Belfast’s City Hall for a tour, which was actually pretty impressive to see. It’s a beautiful building whose construction started in the late 1890’s and finished in 1906. When we entered the building, we were greeted by the sight of the beautiful marble grand staircase, as well as the interior of the dome which is illuminated by a huge chandelier. Heading up the staircase, we arrived at the first floor rotunda and learned all about the history of the city as it was illustrated in a huge mural. We then headed into the council chambers, where we were able to sit in the Lord Mayor’s seat–but we were NOT allowed to sit in the very old chairs on which the current Queen’s grandparents sat. We wouldn’t have wanted to anyway, as they’ve seen better days…

Next, we were treated to the sight of our dear Campbell donning one of the councilor robes in the robing room. We learned why the sleeves had extra bits of fabric on the end (hint: sewage used to run down the street right in front of the hall), and also saw some older ceremonial robes. We then headed to the reception hall, which features gifts from many ethnic minority groups that live in Belfast. The banquet hall had a Titanic theme, with many replica items from the Titanic as well as a memorial plaque that had been taken down to the wreck and brought back up to the surface. Finally, we made our way to the great hall, which was HUGE. This room, like nearly every other room, contained beautiful stained glass windows. Interestingly enough, during WWII they were removed and stored in the basement of a local home to protect them from bombings, being replaced once everything was safe.

After the tour, a large group of girls made their way over to Victoria Square to take in the view from the top of the dome–and to do a bit of singing as well! Once their impromptu concert was over, they found themselves some lunch and then headed by to St. Patricks for a dress rehearsal for the evening’s gala concert. When the rehearsal was over and we had figured out the logistics of moving from our seats to the “stage”, we headed back to our hotel to change into our concert attire and eat a delightful buffet dinner.

Last night’s concert was truly special–the girls were totally on in their solo set, and all of the hard work in the rehearsals paid off in the festival choir portion of the show. We had the audience in the palms of our hands! We ended the program with two gospel pieces, “Take Me to the Water” and “Total Praise”, adding a drummer into the mix. To say we brought the house down is an understatement; I think we blew away even our own selves. It was a very spiritual experience, with many tears being shed. I know for a fact that I was not the only one feeling the way I was feeling last night, or even during our whole time in Belfast. It was one of those experiences that will definitely stay with us for the rest of our lives.

This morning, we arose at a reasonable hour, ate some breakfast, loaded our luggage back onto the bus, and headed down to Dublin. Stopping in a lovely rest area along the way, many of the girls spent their first Euros of the trip on coffee and oodles of candy; some of them just played around on the playground. In any event, we all managed to find our way back on the bus and complete the journey to Dublin. And my, what a change of pace!

First off, Dublin has WAY MORE people. Our first day in Belfast, we were lucky to see other people walking on the streets with us. In Dublin, we were greeted by throngs of people on every sidewalk in the city. There are also a lot more street performers, which is very cool to see–musicians, magicians, people pretending to be statues. We were dropped off on Nassau Street (how appropriate!) for some time to wander and find some lunch, and then headed over to Dublin’s St. Patricks Cathedral. While getting a short tour (we’ll be singing there on Saturday so we’ll have more time to explore!), we learned about St. Patrick’s two symbols: the clover and the Irish cross. We also were able to see the death mask and skull cast (kind of creepy) of Jonathan Swift, who aside from being an author and satirist found time to be the Dean of St. Patrick’s Cathedral.

As we made our way to our hotel and past “The Stiletto in the Ghetto”, Ms. Butler made an exciting announcement: after checking in, we were going on a special surprise excursion in celebration of Emma and Nora’s birthday: a visit to the National Leprechaun Museum! Not entirely sure what to expect, we found it to be a really fun and interesting place to visit. We learned facts about leprechauns (Did you know that it was Disney and Lucky Charms’ fault for making the “normal” look of the leprechaun a green-clad, red-headed creature? In folklore, leprechauns actually wore brown coats and a pointy red hat!), walked through magical tunnels, visited the land of giants, learned about the history of folklore in Ireland, traveled through a rainbow, found a pot of gold, and heard stories and legends from our awesome tour guides. At the end, we performed for the museum staff (https://twitter.com/leprechaun_ie/status/751108930814828544) and posed for pictures as leprechauns.

Our evening ended at a very cool restaurant called (appropriately enough) “The Church”. It was a hip bar and restaurant that was housed in an actual church that they had gutted and retrofitted. It was quirky and cool to be eating our awesome dinners (salad, lamb and potato, and apple pie–gluten free and vegetarian options available!) while looking at stained glass windows and a large pipe organ that Handel (yes, the “Messiah” guy!) had played when he was in Dublin. After we sang “Happy Birthday” and “She’s a Jolly Good Fellow” for Nora and Emma, we all headed back to the hotel for an early night in. I, of course, went for my evening walk, wandering all around the city and taking in the sights and sounds. It’s amazing how musical this place is–as I walked the streets, I could hear live music coming from nearly every pub. It was also very cool to be in town during the EuroCup–when France scored for a second time, I happened to be standing on a bridge over the River Liffey and could hear a collective roar from the whole city. It was a very cool moment!

So that’s all for now. We have our second gala concert tomorrow night (or tonight, actually, seeing as it’s 2AM). Until then, hope you’re all doing well! It’s hard to believe it, but we’ll be seeing you relatively soon!