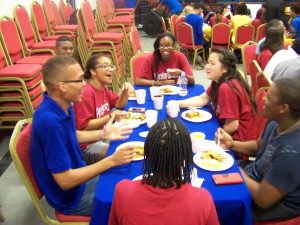 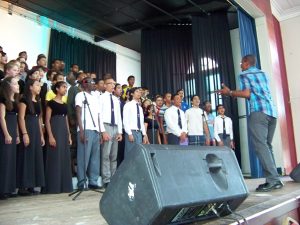 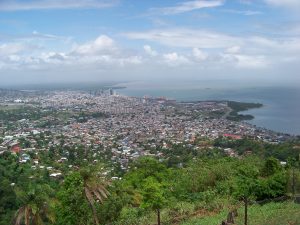 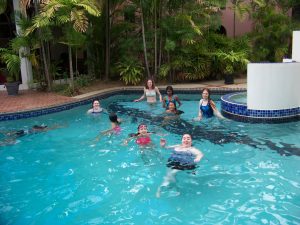 Sorry for the delay in the latest blog post–after an excellent but exhausting day, sleep needed to happen!

Yesterday morning we started the day with breakfast and a pool party. Because our tour has been non-stop with all of our performances packed into the three days in which we’ve been here, we really haven’t had any time to let our hair down and just relax and soak up the sun. We decided that since we had a little bit of free time that we should use it recreationally and take advantage of the beautiful pool at our hotel. It really is picturesque–from the pool you can see not only the hotel, but also some of the surrounding mountainous terrain, lovely palm trees, and even some mango trees. After a couple hours of swimming, we took a little bit of time to freshen up and prepare for a busy day out and about Port of Spain.

Our adventures started with a stop at the local pizza place–or at least one of the few places that was open for business on a Sunday. In Trinidad, pretty much everything shuts down on Sundays when it comes to businesses, so finding a place to get lunch was a bit problematic. After picking up our plethora of pizzas, we took a bit of a harrowing journey up the side of the mountain, via very steep and narrow roads (we feared the bus wasn’t going to make it, and I’m not just being dramatic when I say this), to Fort George. Built by the British, this “fort” wasn’t so much a fort in the sense that we’d think as it was a little house, a few cannons that were never used (because in Trinidad they don’t really get around to fighting), and a stunning view of Port of Spain below. The girls took in the amazing views while eating Trini pizza–some of us even enjoying the special ketchup that they like to put on their pizza here. The girls also had a fun time eating various fruits that we picked directly off the trees, as well as fending off some stray (or not stray–we heard various reports) dogs that seemed very eager to partake in our meal. After a while, we returned to the busses and coasted down the side of the mountain, observing some huge termite nests on some of the trees (apparently the termites are good to eat–they taste like carrots) along the way.

The Fatima College was our next stop on the trip and the site of our final concert of the tour. An all boys school (how exciting!), Fatima is considered to be the top school in all of Trinidad. We changed into our concert dresses and had a very quick rehearsal with the boys in preparation for the concert–because of our delay in leaving the States, we had missed out on our full afternoon workshop with them and had to rush the collaboration process a bit. The girls were more than up for the challenge, and when concert time rolled around, they were highly energized by the festive atmosphere and band consisting of three drummers, a keyboardist, electric guitarist, and steel pan player–all boys from the school. The audience was very receptive, and it was hard not to dance along with the boys in their impressive solo sets. The girls sang beautifully again, and were heavily supported by the boys–who seemed to be highly excited to have a girls’ choir in their midst. Everything about this concert was fantastic–I even got to participate in an impromptu jam session with the band at the end of the concert! A great time was had by all.

We changed out of our concert attire and then had a lovely and sociable dinner with the boys. The girls and boys really hit it off and were like old friends, despite meeting only hours ago. There was lots of laughter, lots of singing, and lots of exchanging of social media information. I have a feeling that we will continue to be in contact with this group. When the time came to leave, we sang “The Lord Bless You and Keep You” for them as a thank you, and they sang “Bridge Over Troubled Water” in response. We boarded our busses, and so did some of their guys–they wanted to come with us (because we’re just that awesome, apparently). We managed to fend them off, as they all chanted, “Princeton, Princeton Girls!” and danced for us. It was kind of awesome, and I’m sure the girls appreciated the outpouring of affection.

Because a few of us are not able to stay along for the extension of the trip, we gathered by the pool and handed out the first batch of paper plate awards and said our goodbyes. It was then off to bed, resting up for today’s activities: a day at the beach, with a hike through the rainforest to a beautiful waterfall, and an exotic lunch (shark sandwiches?). I’ll be sure to tell you all about it when we return tonight!