Divas Check Out More of Trinidad 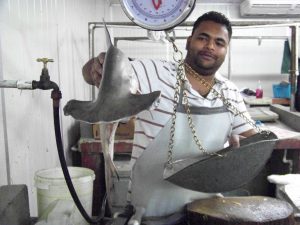 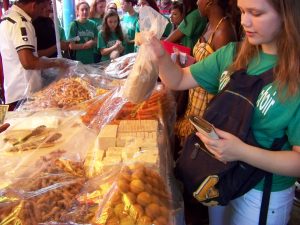 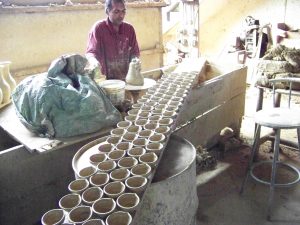 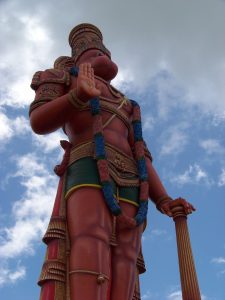 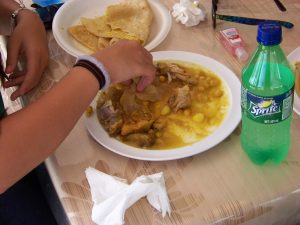 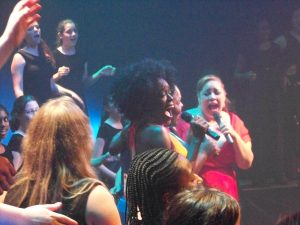 I’ve delayed writing this blog for a little while–we’ve been back at the hotel for a couple of hours now, after another exciting and all together different kind of concert tonight: “Divas Live”! It’s been an interesting day, and we’ve gotten even more awesome cultural experiences along the way.

When I had left you, we were about to get on a bus. The bus to us to the town of Chaguanas, which was about a half hour drive from our hotel. Along the way, our tour guide, Tano, quizzed us on some of the trivia he had taught us yesterday–each correct answer earned mangos picked directly from his very own mango tree. Unfortunately for the girls, they had some issues with getting some of the answers to his questions; fortunately for the girls, he also awarded mangos to those who were able to sing a Caribbean-influenced song or recite a poem (we have some pretty impressive memories–lots of Shakespeare, and even some originals!). By the end of the day, everyone on our bus had at least one mango to show for their efforts.

As we entered into Chaguanas, Tano told us a little bit of the historical background of the peoples of Trinidad and why there were so many East Indians here in the first place. When European settlers first arrived, they took natives as slaves; they then brought Africans over as slaves; and then after slavery was banned, they brought over the East Indians as indentured servants. Over time, there were clashes between the Africans and East Indians (most over job markets), but the WOMEN of both groups eventually smoothed everything out and created the harmony that still exists today between the different cultures.  Trinidad continues to be a very accepting nation, be it of race or religion. In fact, all religious holidays are days off in Trinidad, no matter what religion is celebrating–which leads to lots of different people from different religions celebrating and learning about the other holidays by going to the temple, church, mosque, etc, of their friends and neighbors. It sounds like a very cool way to live–we could stand to learn from this way of life!

Our first stop was the Fresh Produce Market and Bazaar. This was a very interesting place for our girls to experience–as we entered, we were greeted by huge crowds and some very strong smells–mainly the fresh crabs that were tied up but still trying to crawl away on the tables in front of us. And there were the fresh slabs of newly-butchered pork and whole pigs’ heads–there may have been one or two selfies taken with them (I know I took one). There were peppers of all different kinds–including the aforementioned scorpion peppers (dragon/rocket combo). Bananas, plantains, lettuce, ginger, mangos galore! My personal favorite section was the fish market, with all sorts of fresh fish being scaled and gutted right there–including a couple of hammer head sharks! The butcher posed the shark for us, much to the delight (and in some cases, horror) of the girls. But no worries–it wasn’t just gross-out material. We were sure to also stop by some stands that were selling dark chocolate and wonderful pastries (I sampled a little bit of everything). The people were also delightful, making jokes with me especially–the men were joking about my being the only man in our group. “Yah, mon, it’s tough being de only mon in a bunch, but it important work you doin, looking afta dem!” Very true, new friend!

After surviving the market, we got on the busses and headed to a local pottery shop. The girls each got a chance to try their hand at throwing some pottery on the pottery wheel if they wanted to, making a small bowl that can be used during Diwali to hold candles or to be filled with oil and wick. The girls were given some pointers, and they all discovered that it was much harder than it looked–the workers at the shop were making each little bowl in probably five to ten seconds apiece! It was really amazing to watch them work! After making our bowls, we had time to look at all of the pots that were on sale–if I had more room/a whole other suitcase packed with bubblewrap, I would have bought some of the beautifully painted pieces. All of us ended up with one of the small bowls, as our tour guides bought each one of us a bowl to take home as a souvenier (in addition to the bowls that the girls made themselves)!

Our next stop was the ashram and Lord Hanuman statue. Standing at an impressive 85 feet tall, the statue represents the Hindu god Hanuman, the monkey god who was known in some texts to be an incarnation of Shiva. We walked around the ashram and temple, which was beautifully and ornately decorated. This particular temple was begun fairly recently, and even more recently completed (within the past 15 years). There was a peaceful atmosphere here, and it was amazing to me to see the craftmanship of each of the intricate design details in the arcitecture. Walking back to the bus, it was a very picturesque scene with the Lord Hanuman statue in the foreground and the beautiful mountains in the background.

By this time, our sweet snacks from the market were no longer holding us over and it was time for lunch. We stopped at a local roti shop on the side of the road for a delicious lunch treat. For those of you that don’t know, roti is a tradional dish with meat (there were vegetarian alternatives, too!), curry, chick peas (or not chick peas…I can’t remember what they were called, but the were simliar to chick peas), and a type of thin bread that was almost like a cross between naan and corn tortillas. The only catch was this: you were not able to use utensils–the traditional way to eat it is with your hands only! We all got quite dirty eating lunch, but it was all worth it in the end with all of us highly satisfied with our lunches. Some of the girls even experimented with some of the hot pepper sauces, leading to challenging R Dawg to eat some of the hot pepper sauce. I tried it, and it really wasn’t that bad–more tingly than anything.

After driving back to Port of Spain and spending about an hour at the hotel freshening up (or swimming if your were ambitious!), we were back on the bus and off to the Little Carib Theater. Living up to it’s name (the “Little” part), the theater was home to tonight’s concert, “Divas Live”. We met and rehearsed with the Eastern Youth Chorale, learning a couple of new songs in the process–including a soca (a popular style of music in Trinidad). The theme of our trip (“flexibility!”) was out in full swing during this rehearsal and leading up to the performance–there were some issues with programming, keys of pieces, rehearsing pieces that we ended up not even performing, uncertainty as to whether or not we would be singing a solo set–those sorts of things. In the end, it all worked out.

After a quick dinner (very quick!) and changing into our formal concert attire, we had about five minutes on stage to go over the plan for the solo set that we WOULD be performing. Then it was backstage for a few minutes, and then right back on stage to open the concert. The girls were brilliant as always, with a very warm reception from the audience! The girls then got to relax and head up to the balcony to enjoy the rest of the show, which featured various divas of different disicplines–there were classical singers, caberet singers, violinists, pop/soul singers (my personal favorite of the evening), and jazz singers. By the end of the show, we were invited back onstage to participate in the (unrehearsed!!!!) final number, “I’m Every Woman”. I may or may not have made a cameo appearance on stage dancing to this one…okay I was dancing in the back, apparently more visible than I had thought. The number turned into a big party, with Sindhu and Ms. Jenkins both getting some quality solo mic time! The atmosphere was electric, and you couldn’t help but dance!

And so the concert came to an end, and we got back on our busses and headed back to the hotel. Tomorrow we can sleep in or participate in some optional pool time. Seeing as it’s after 2AM, I might opt for the sleeping in. We’ll see…