Day Two: Pearl the Panda gets some beads and other adventures

Good morning! Yesterday was an excellent day of exploring the city, so let’s get right to it!

We started the morning with breakfast at the hotel, thanks to our love Ms. Bulter’s early-morning trip to the grocery store. Our hotel does have breakfast options, but they are all pretty expensive for what you actually get. I opted to get up early and head over to the famous Mother’s Restaurant and took advantage of their “Early Bird Special”: two scrambled eggs, grits, sausage, biscuit, and coffee–all for $7.20. You can hardly even get a cup of coffee at the hotel for that price! What a deal, but what a number of calories ingested! Fortunately, I knew that the day’s activities would likely burn off those calories before lunch.

We gathered in the hotel lobby and got a bit of a late start out the door (it’s the first full day of tour, so we’re still getting on board with the whole “to be early is to be on time” routine). We walked on over to the French Quarter and met our awesome tour guides for a very interesting and informative walking tour of the area. [Side Note: Remember how yesterday I claimed it was hot and humid, but not oppressively so? I still stand by my statement, but the girls would probably disagree with me. To be honest, it’s been no worse than Rome last year–but I have to remember that not everyone on THIS tour was on THAT tour. But yesterday, we walked around the area for two hours in the sun, so it was a pretty constant barrage of rays and humidity.] We split into two groups with two tour guides, so I can only speak to the experience of half of us. That being said, our tour guide offered us a fascinating history of New Orleans, from the earliest settlers/natives, the French, the Spanish, the French, the theory that a city organized in a grid would curb criminal activity, subsequent axe murderers, voodoo (surprisingly connected to the Catholic church–ask your girls how!), the city burning/being rebuilt/burning down/being rebuilt/etc, jazz and its assorted characters claiming to be the sole creators of the art form, Louis Armstrong, and rock and roll. All the while, we took in sights of steamboats on the Mississippi River, the amazing architecture and wrought-iron balconies, occasional peeks into courtyards, the Louis Armstrong park with its various statues (some great, some terrible) of important figures in jazz history. Our tour ended at Cafe du Monde, where we waited in line to get our free (thank you, coupons!) beignets and drink. While being told of the time his local artist friend sold his sweet Spiderman jacket to Stan Lee for $50 by one of the local eccentrics on a park bench, I enjoyed the quintessential NOLA treat with the girls to the sounds of street musicians wafting through the air.

Fully satisfied (and sugar-high), we then split up in buddy groups and explored the French Market for a bit. I know I probably explored a bit more than the girls (as a non-chaperone adult, I get free range to wander as I wish), but there were still plenty of fun and interesting things to see. There were various street performers (I saw a lone sousaphone player wandering the streets, oompa-ing as he walked), pirates, artists with their work on display and for sale, local foods/delicacies (lots of alligator on a stick/jerky, praelines, snowballs, po boys, etc.), and your typical street market jewelry and cheap sunglasses. Being hot, the girls opted to head back to the air conditioned Riverwalk for lunch–which explains why I didn’t really see our girls when I finally made it back to the French Market after a walk down Bourbon Street. They then went back to the hotel for a pool party, while I took in the Women’s World Cup match and took a brief nap before dinner.

If you’ve talked to your girls since dinner last night, you probably heard about the dinner fiasco. Basically, 400 people converged in a much-too-small space on the 10th floor waiting to be allowed into dinner. Once all 400 of us were gathered, we were then told we had to organize ourselves into three lines based on what we had previously decided we were going to eat. And then, in the spirit of fairness, “If you were here first, you should move to the front.” A lovely idea, if only the world worked that way. I write this not to bad-mouth the (dis)organization of the situation, but to let you know that your girls were not exaggerating if they were upset by the dinner situation. In the end, we were all fed, so that’s what counts–right?

After this, we had our first festival rehearsal with all of the combined choirs. Maybe you heard about the beginning of this rehearsal, too, as it featured a similar spirit to the earlier dinner fiasco. After organizing 400 children by both voice type and height order (!), it was time to make some music. At this point, I had already left the hotel for an adventure with Pearl the PGC Panda in NOLA after dark, so I will trust the reports that the rehearsal went well after the initial pandemonium. Pearl and I had great fun taking in the sights, sounds, and even SMELLS (of various types) of Bourbon Street after dark, and she even managed to get some beads and a cool Mardi Gras mask (my treat!).  But don’t you worry–I was sure to have her back by the 10PM curfew.

So that’s what we did on day two! Today promises to be another adventure! 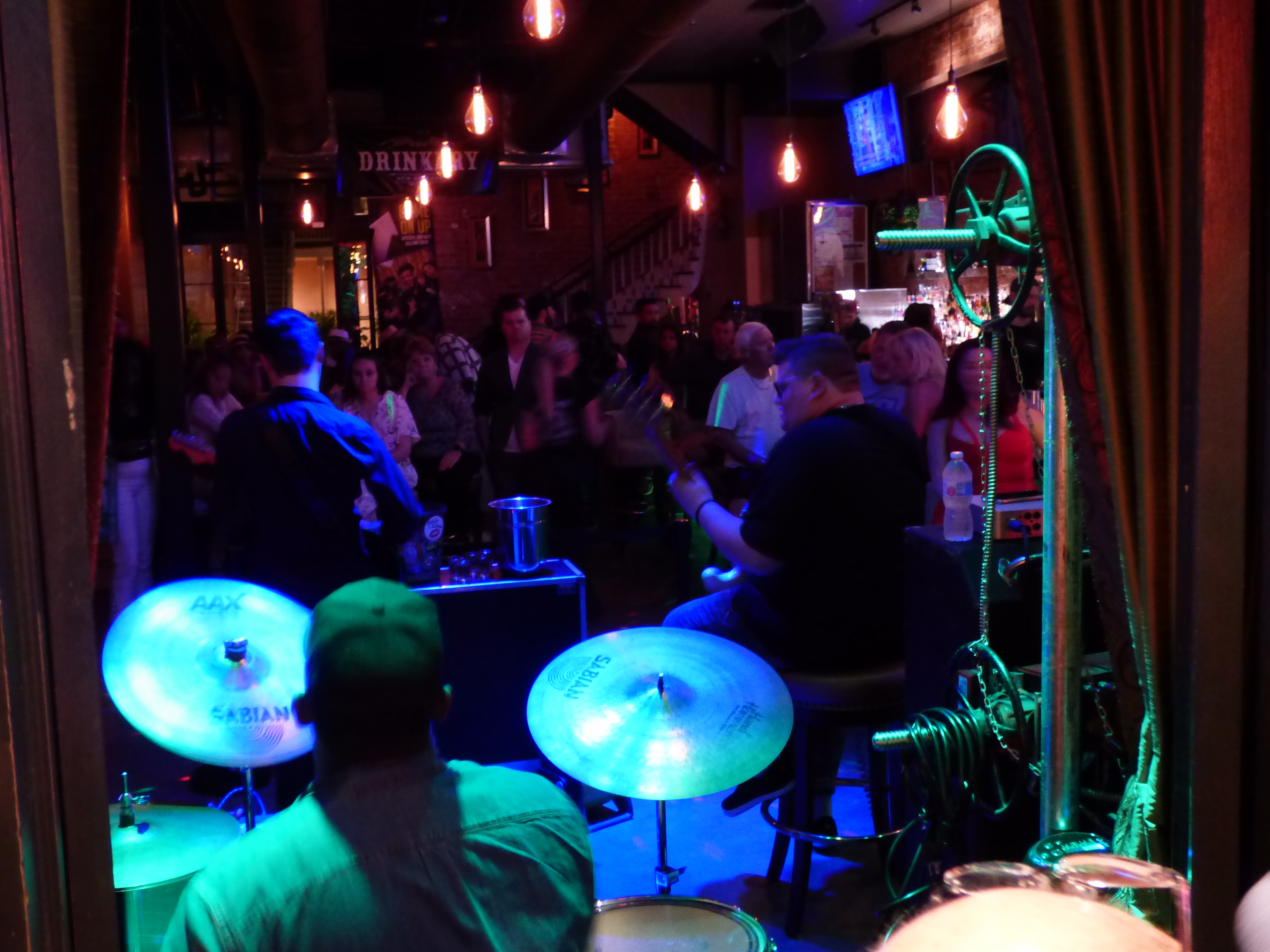 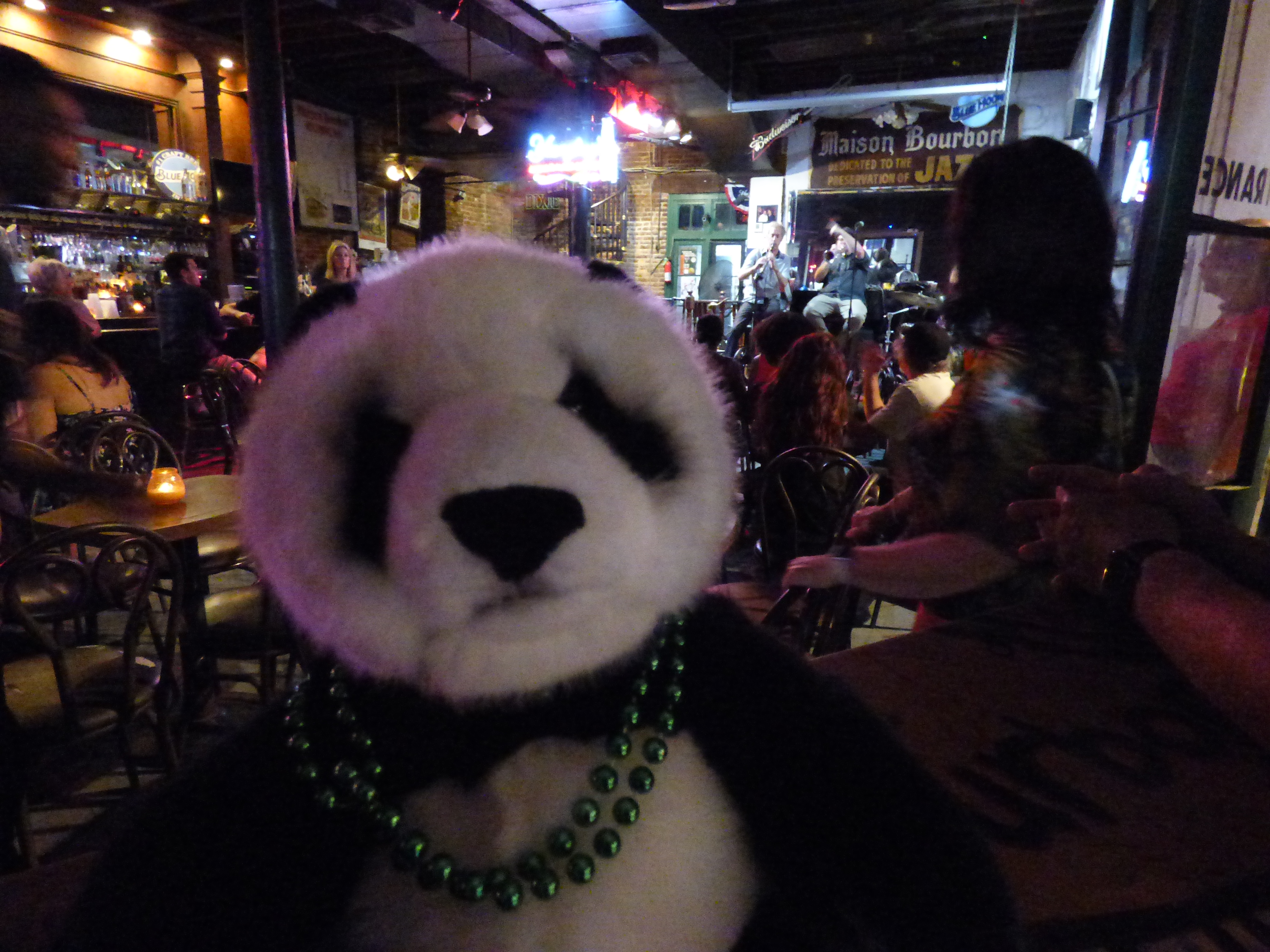 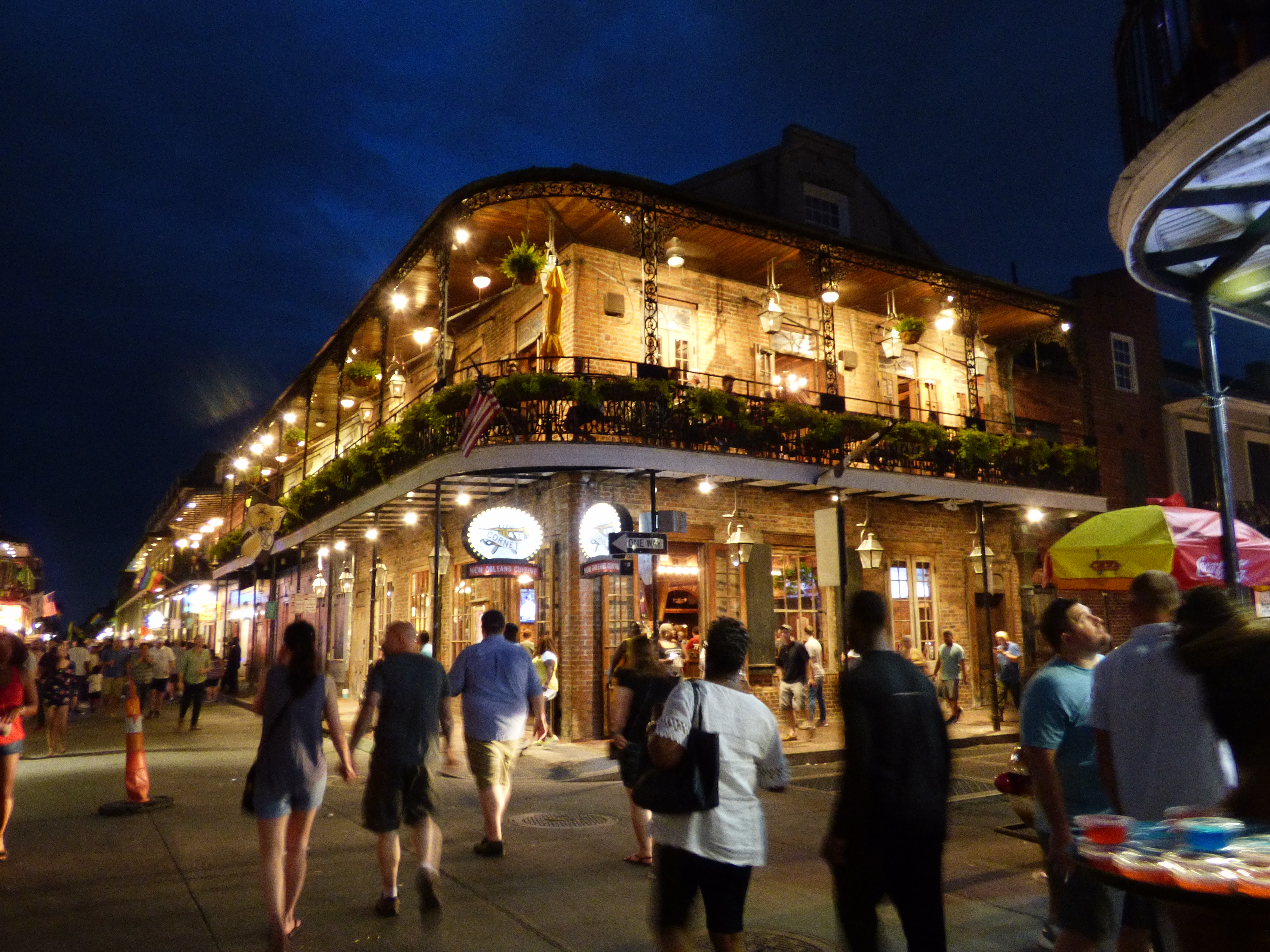 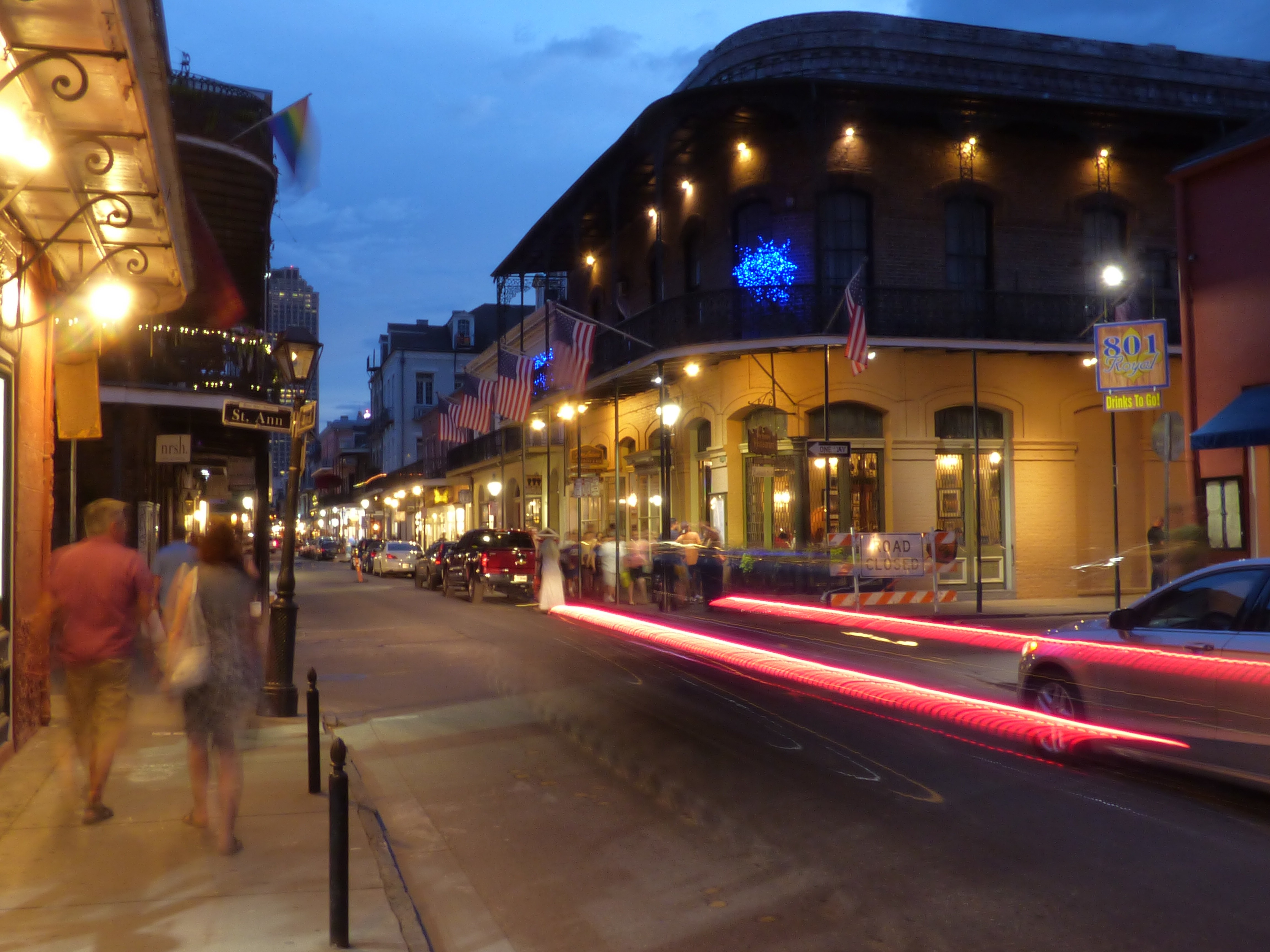 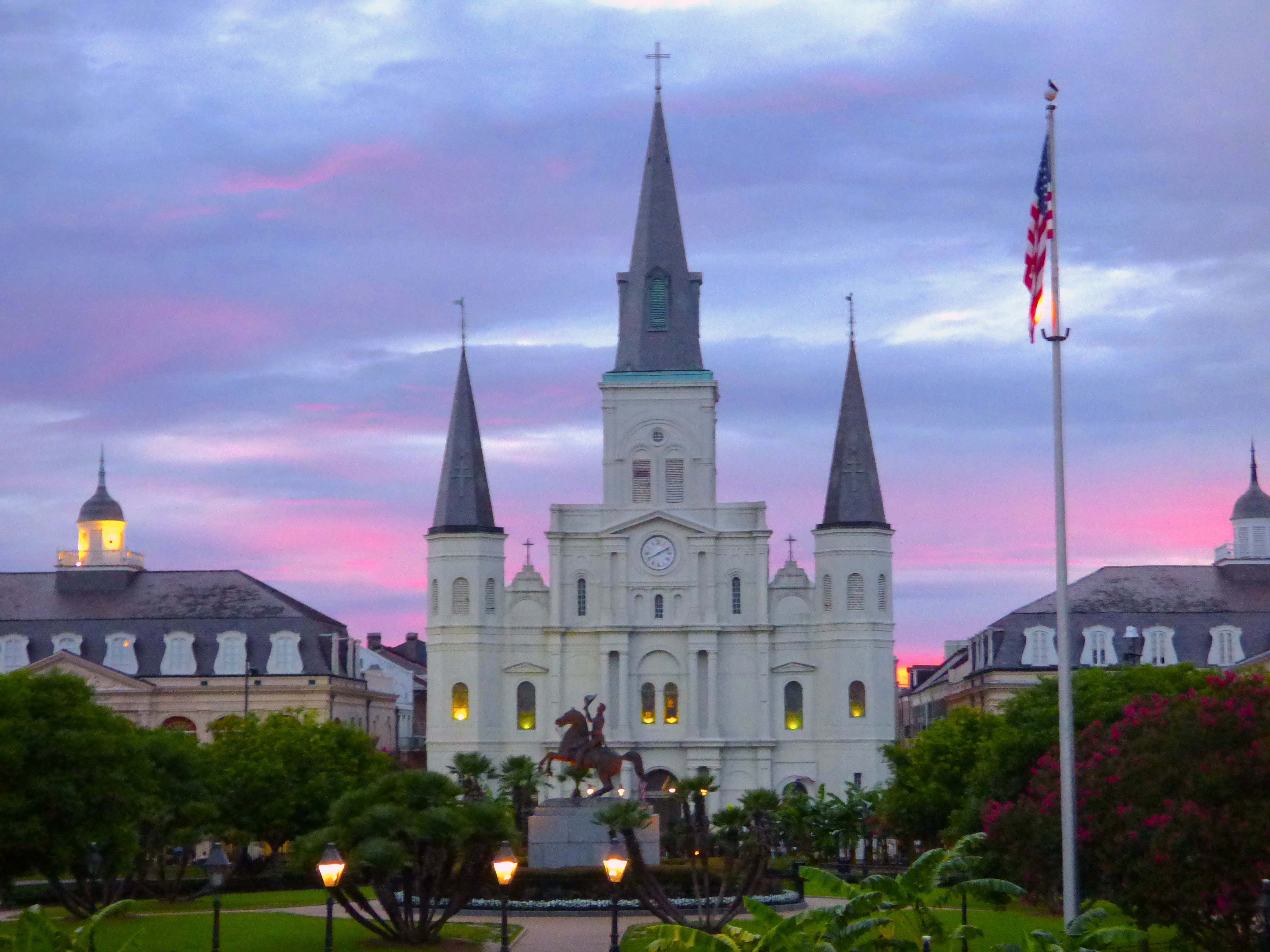 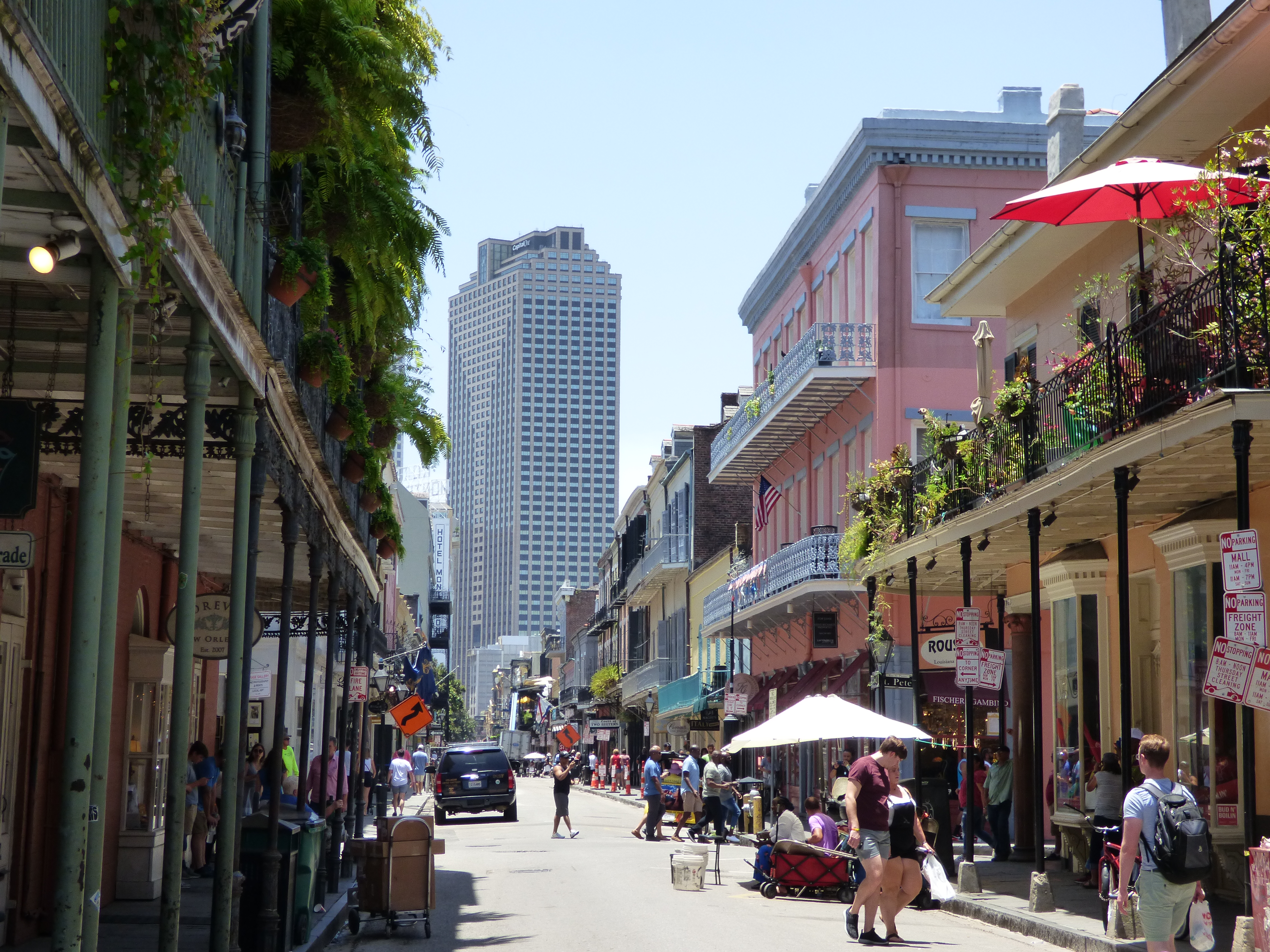 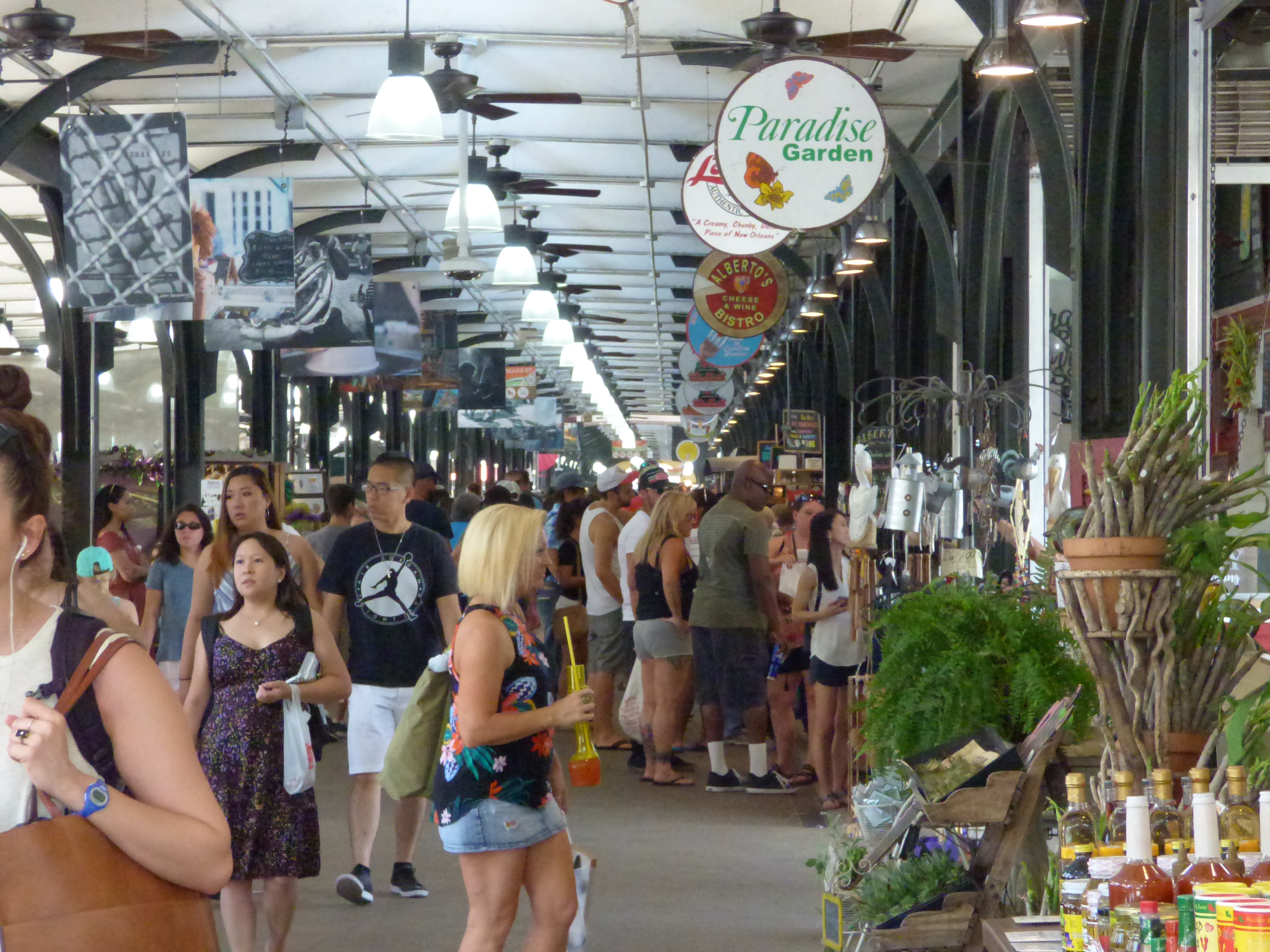 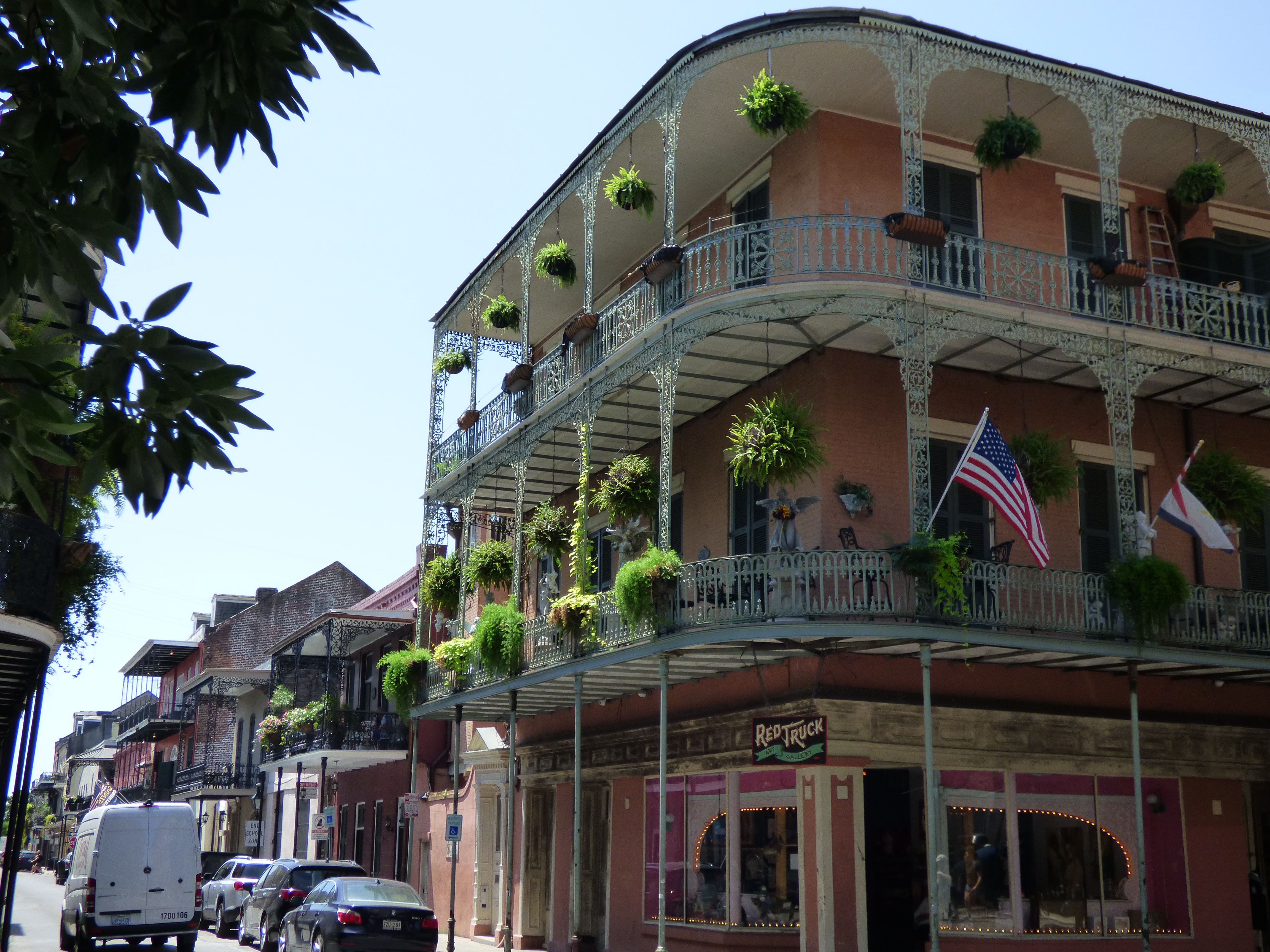 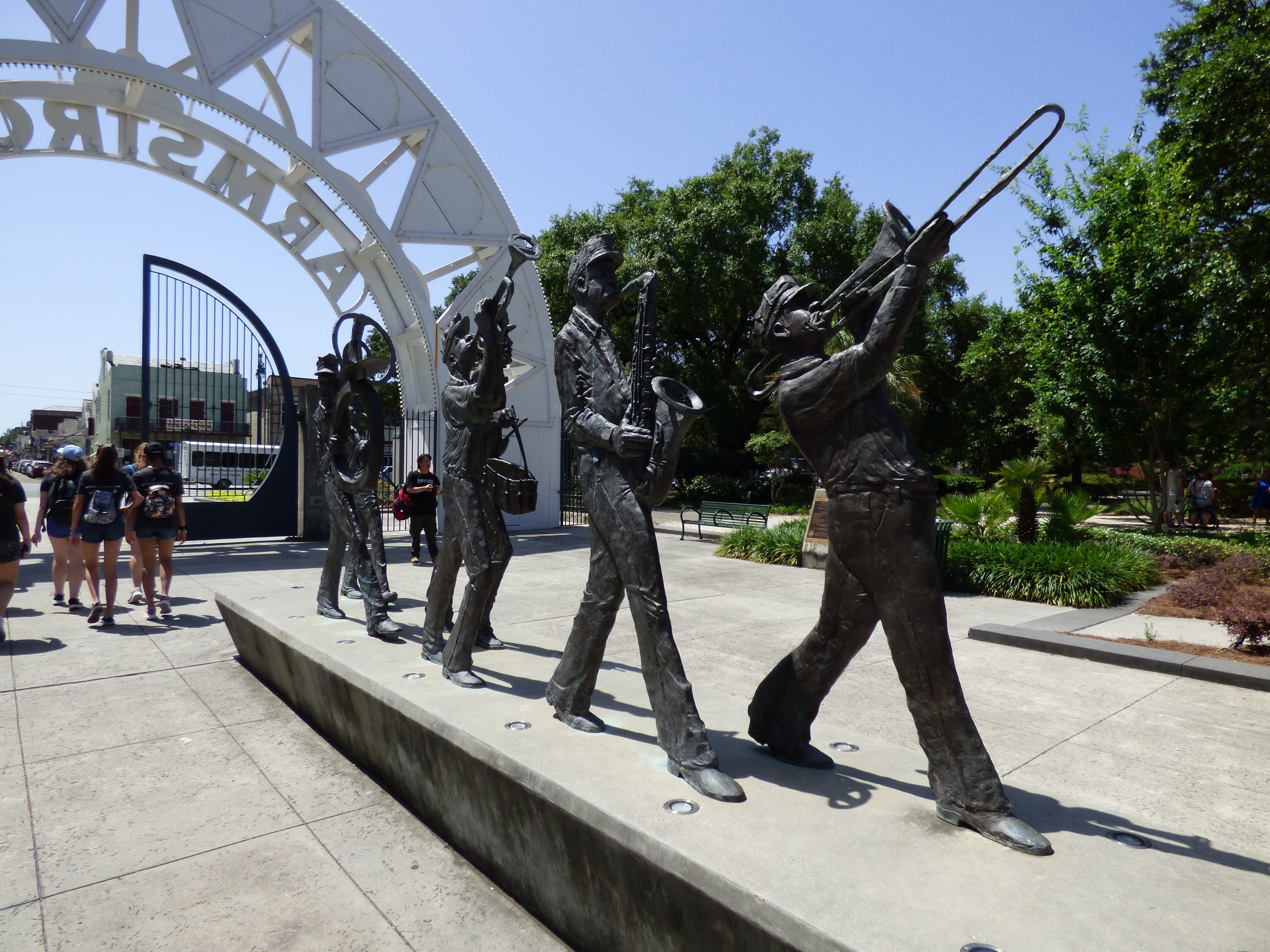 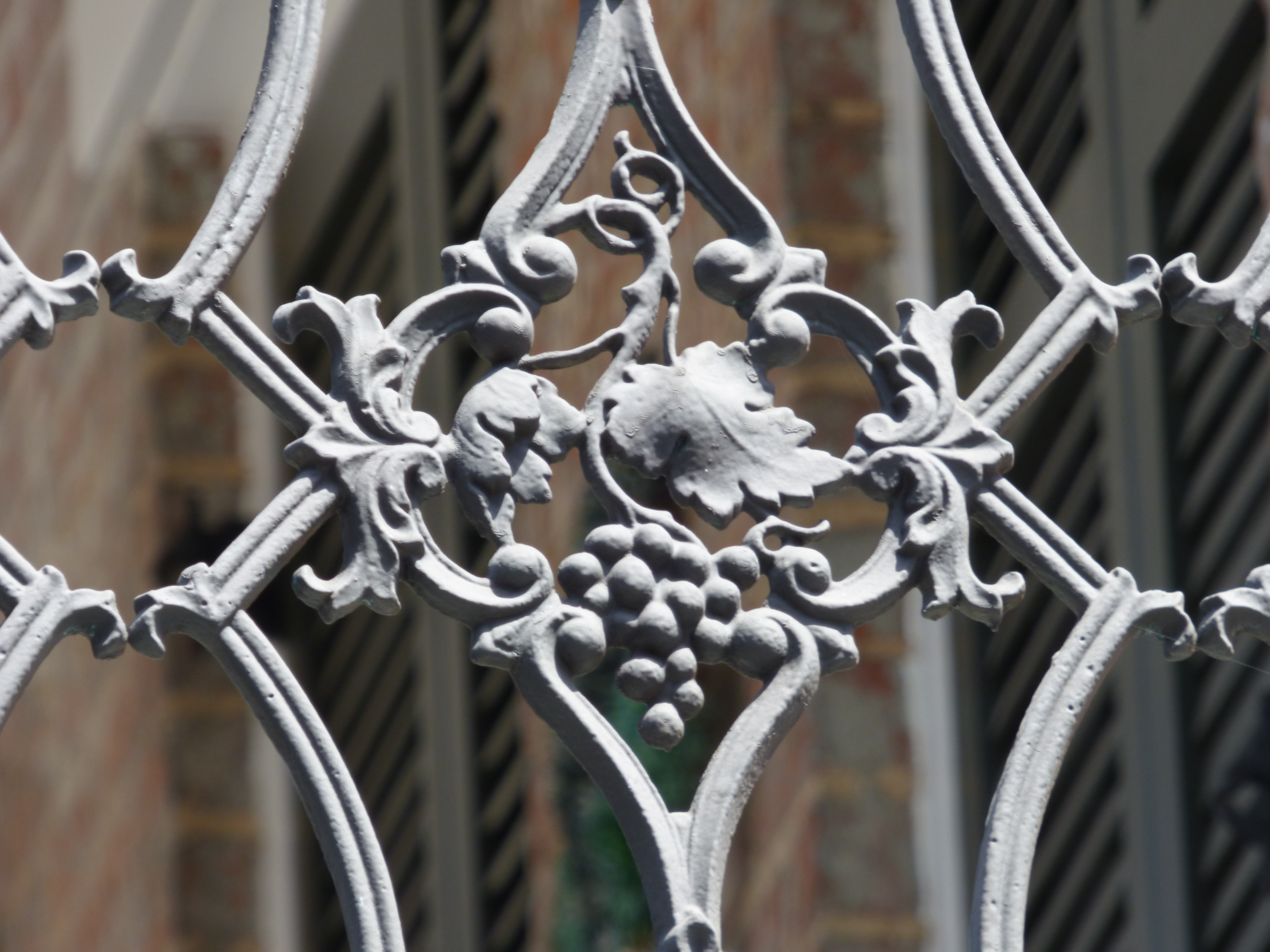 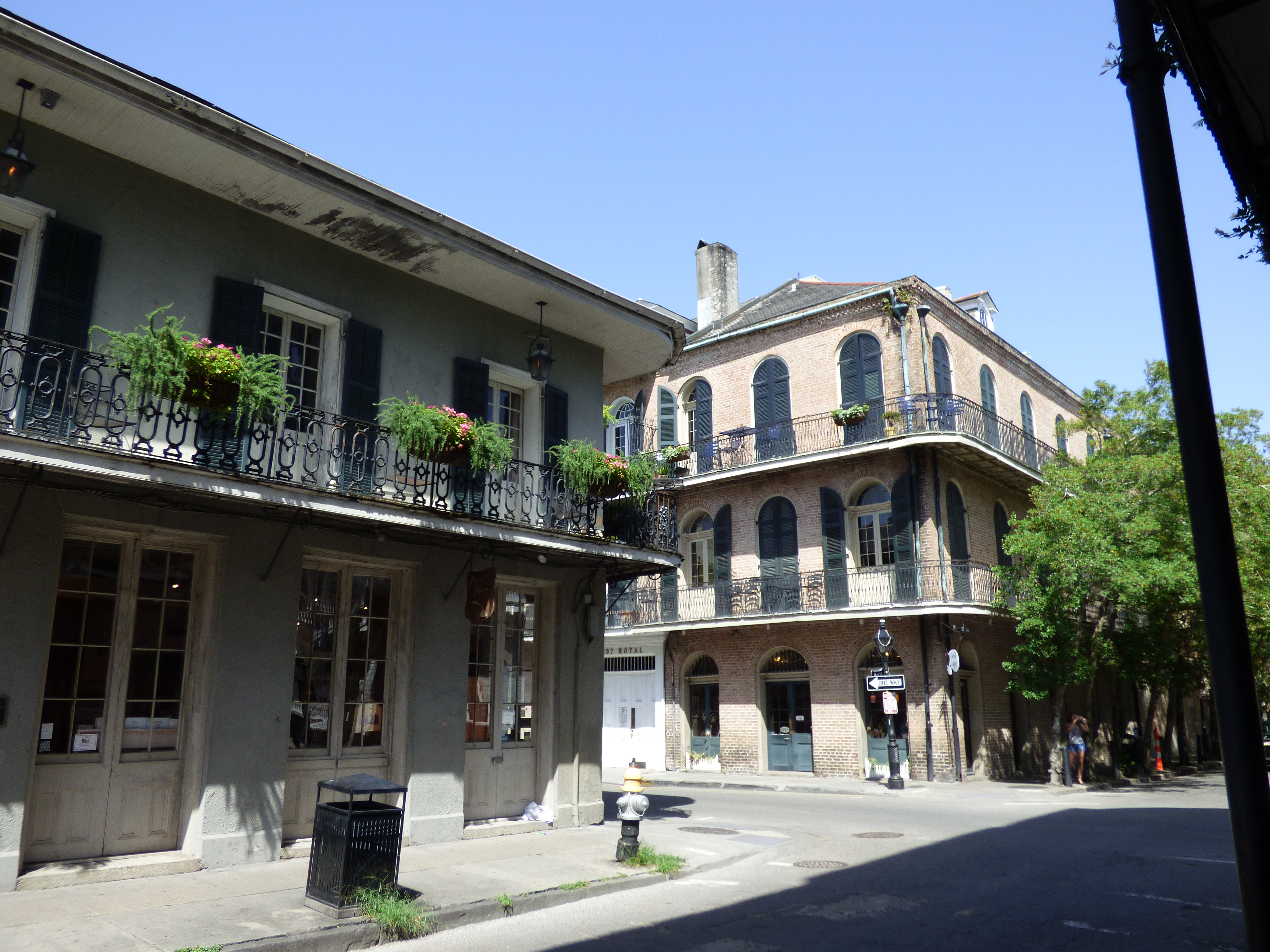 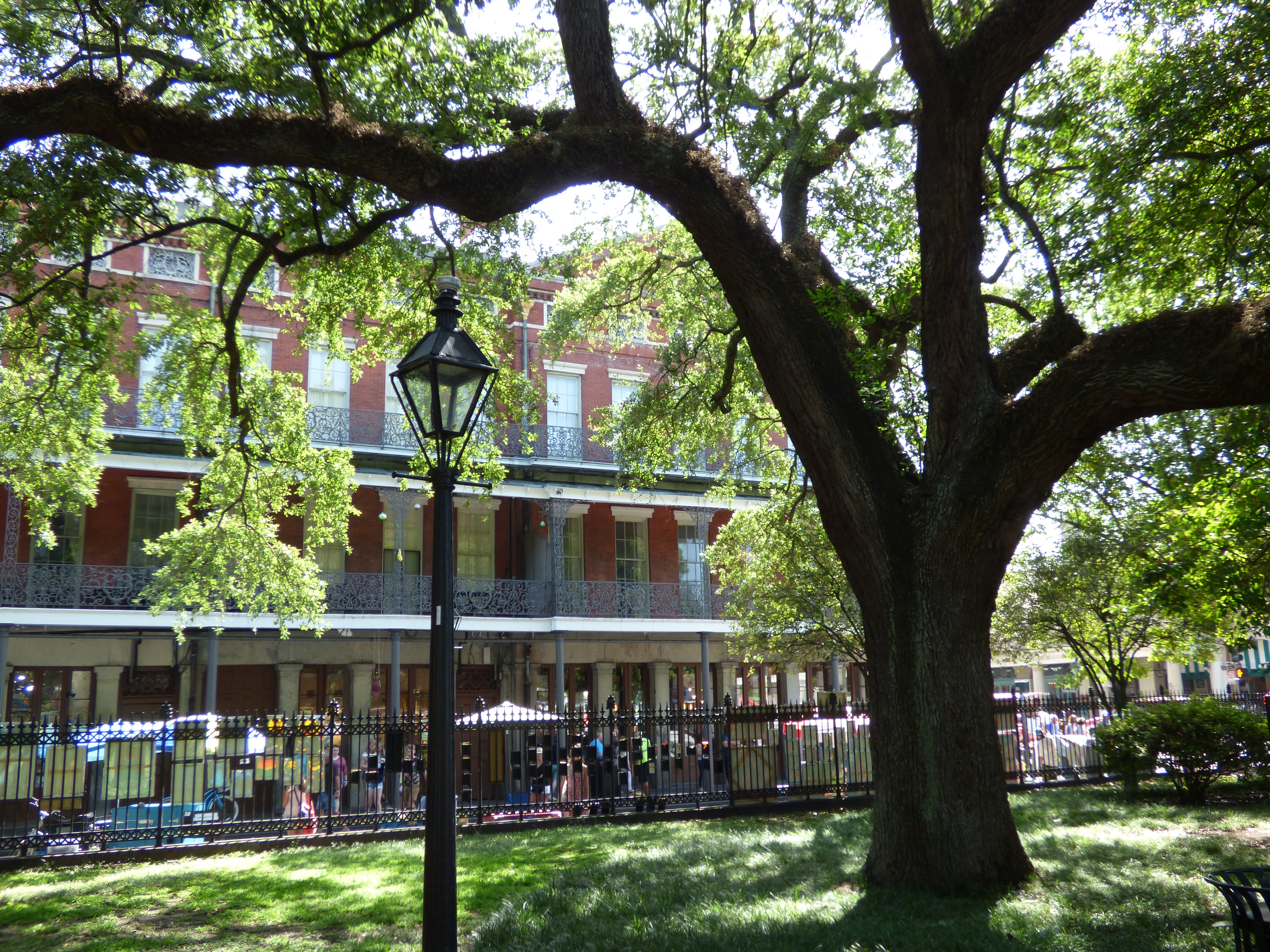 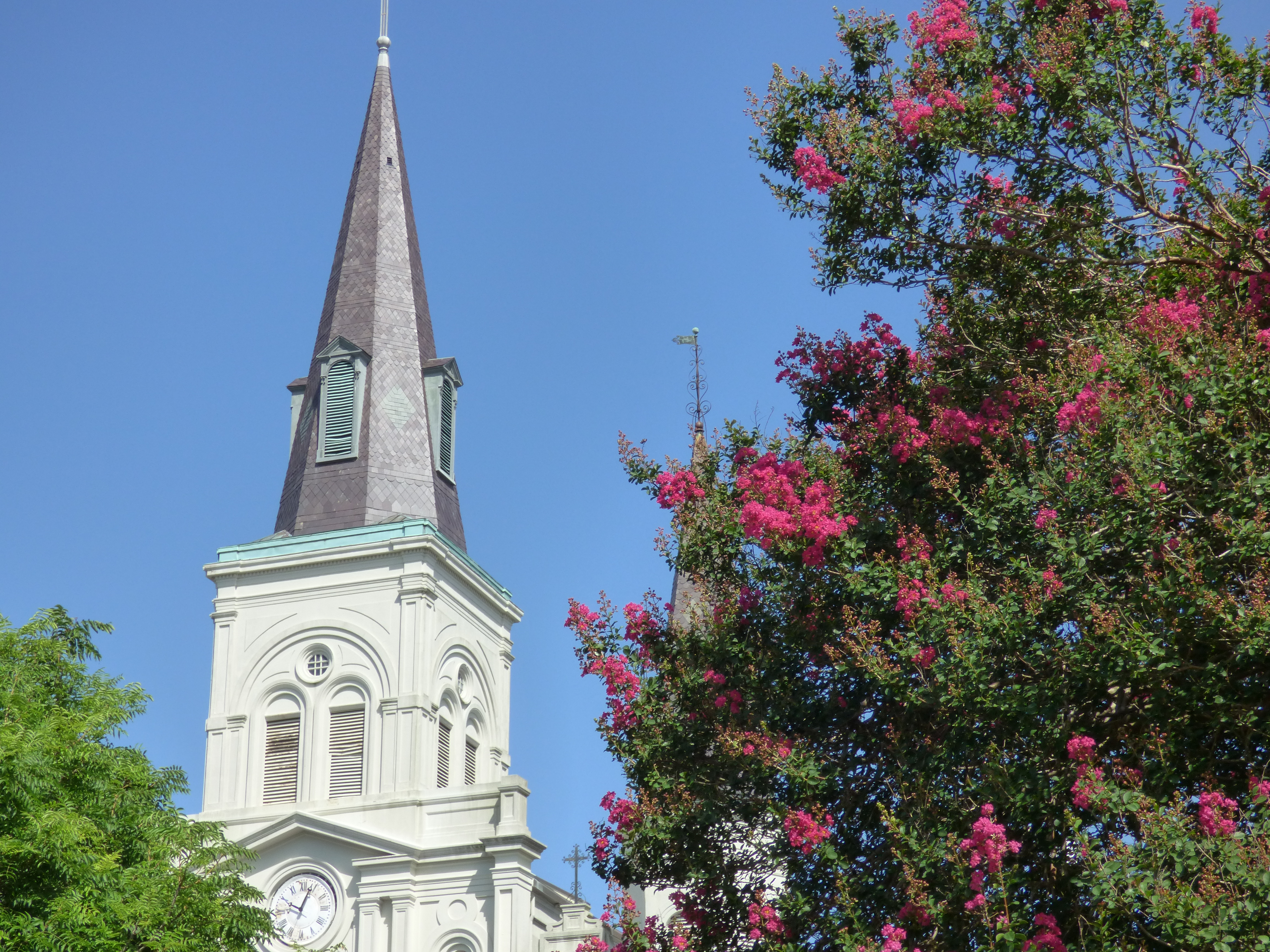