I apologize for the brevity (I say that, but I’ll still probably write more than I was expecting to), but we’ve got an early out-the-door time this morning and I’m writing this as I scarf down some more of Mother’s eggs, grits, sausage, and biscuits. Also, I will add pictures this afternoon, as there are a lot of fun photos to share but not enough time to sort and upload at the moment…

We had a relatively chill day yesterday. It started with a “breakfast” provided by the hotel (muffins, fruit, cereal, and some donuts that needed creative solutions to give them some semblance of tasting like an actual donut–notice the distinct lack of protein in the equation). The girls had a marathon rehearsal with both the leader of the festival (Cheryl Dupont) and Bob Chilcott while I took advantage of the hotel’s gym (gotta burn off those beignets, right?) and then a quick walk through Lafayette Park and a final stop at Starbucks. Since I wasn’t actually IN the rehearsal, save for a few minutes of taking in the action of Bob Chilcott rehearsing his brand new “Samba Mass”, I’ll leave it to the girls to describe the experience. All in all, it sounded like a productive rehearsal from what I’ve overheard from the girls throughout the day.

After the three-hour rehearsal, we walked back on over to the French Quarter (I think we’re starting to get our bearings in NOLA) for a nice lunch at Landry’s, a local seafood place, where I enjoyed a lovely pre-salad salad and a salad. Don’t worry–the girls had burgers, chicken tenders, fries, and shrimp options, too. I just figured since we’ve been eating so–shall I say “decadently”?–it wouldn’t hurt to eat something mostly green for a big meal. Once lunch was done, we had a bit of time to wander and explore around the French Market (this time, they ACTUALLY wandered around the French Market!) before heading back to the hotel for a bit of a rest. We were momentarily trapped under a balcony by a sudden thunderstorm, but, honestly, the rain felt pretty good in such a hot and humid clime. Have the girls mentioned that it’s been hot and humid?

After recharging our batteries, we headed out for a pretty wild adventure (pun intended) at the Jean Lafitte Swamp Tour. We knew this was going to be an interesting experience when we were greeted by a sign that commanded “DO NOT FEED THE ALLIGATORS”. As we stepped onto our pontoon boat, I was delighted to spot an alligator swimming right on by our boat. Dr. Jenkins was definitely not as delighted, having not realized that the swamp tour might contain some actual alligators. And, boy, did we see a lot of alligators. Big ones, little ones, a couple of fighting ones, even a little one that we got to hold if we so desired (I so desired, if only to freak out my wife and proudly show my brother and father who had traumatized me many years ago at a park in Florida…)! Ms. Bulter was a bit weirded out, sitting amongst a small pile of severed alligator and snapping turtle heads, while the zydeco version of “Summer of ’69” blared over the boat’s PA system. Our tour guide was hilarious: “If you’re leaning against the railing, be careful; one of them is broken, but I forget which one.” We also had the opportunity to try some alligator jerky, which, admittedly got a bit awkward when the little alligator was being lovingly held by the girls. Oh well. Circle of life and all…

Upon returning to our dock, the girls took a bathroom and gift shop break, and some of us even made friends with a pig (really!). We made the quick drive back to the hotel, had a while to rest some more, and then walked BACK to the French Quarter (we definitely have our bearings now!) for dinner at the New Orleans School of Cooking. Along the way, Ms. Bulter laid the smack down on a Double Tree valet employee due to their consistent blocking of the public sidewalk with oversized vehicles (literally EVERY time) being an obtrusive obstacle to our wheelchair-bound friend. It was pretty awesome–ALMOST as awesome as Stefano going HAM on the Italian restaurant owner last year (a long story that I’m sure someone who was there would be willing to share at some point).

The experience at the School of Cooking was a fun one–our chef for the night, Gumbo Marie, shared with us how to properly prepare each of the dishes we sampled for dinner. And, if we make anything from the menu (we all got recipes of everything we ate), we can send a photo to her and get a diploma. Ms. Bulter and I have already begun to plan our party and taken action to secure our NOSOC degrees. After much food, singing, call-and-response fun, and hilarious mis-hearings (“omelette pralines?!”), it was time to head back to the hotel for bed. I once again took the long way home via Bourbon Street, where I had the misfortune of stepping in a puddle of questionable origin. In any case, that’s what soap is for, right?

So that’s all for now. I’ve gotta run–we’ve got a trolley to catch! 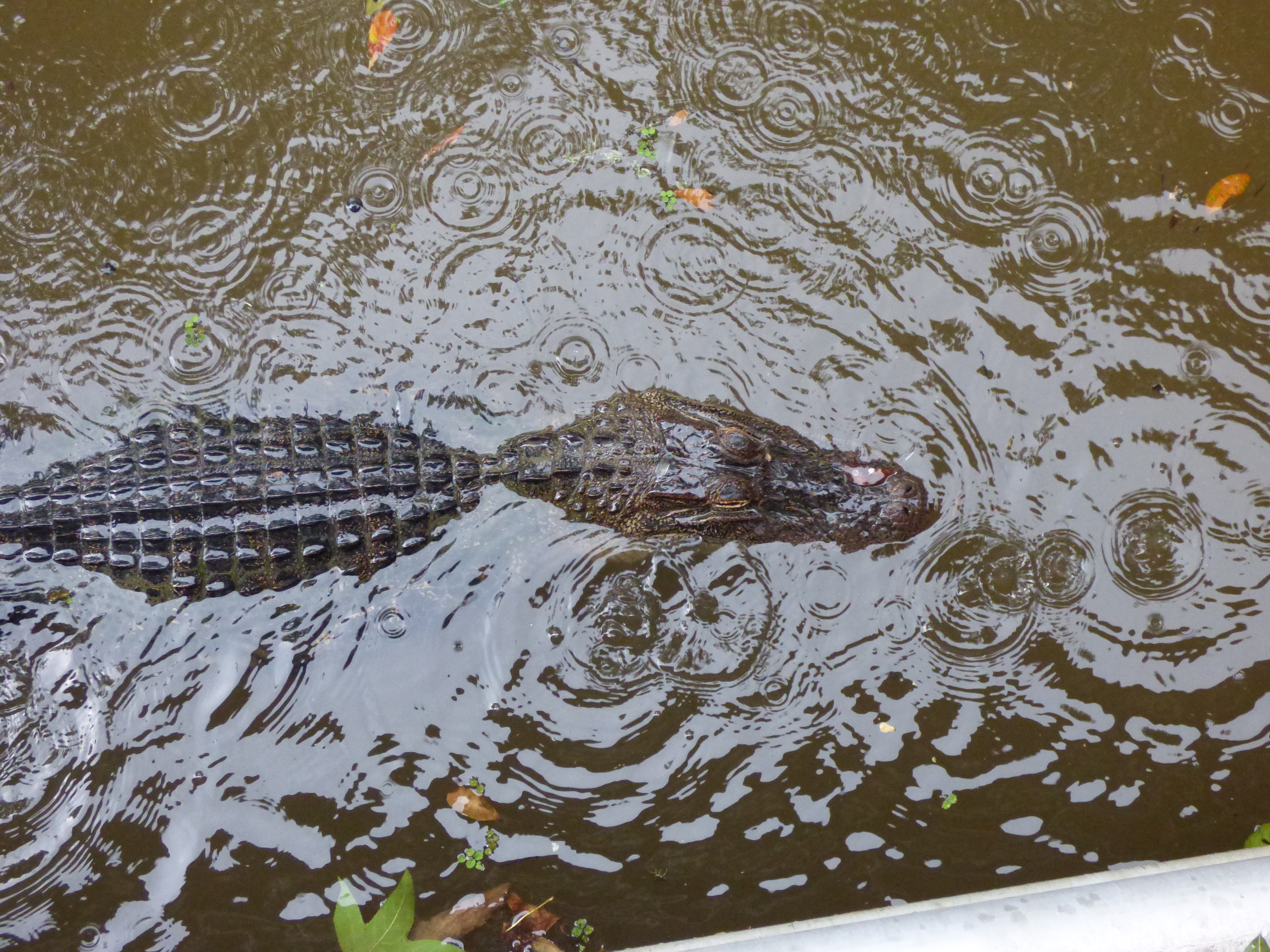 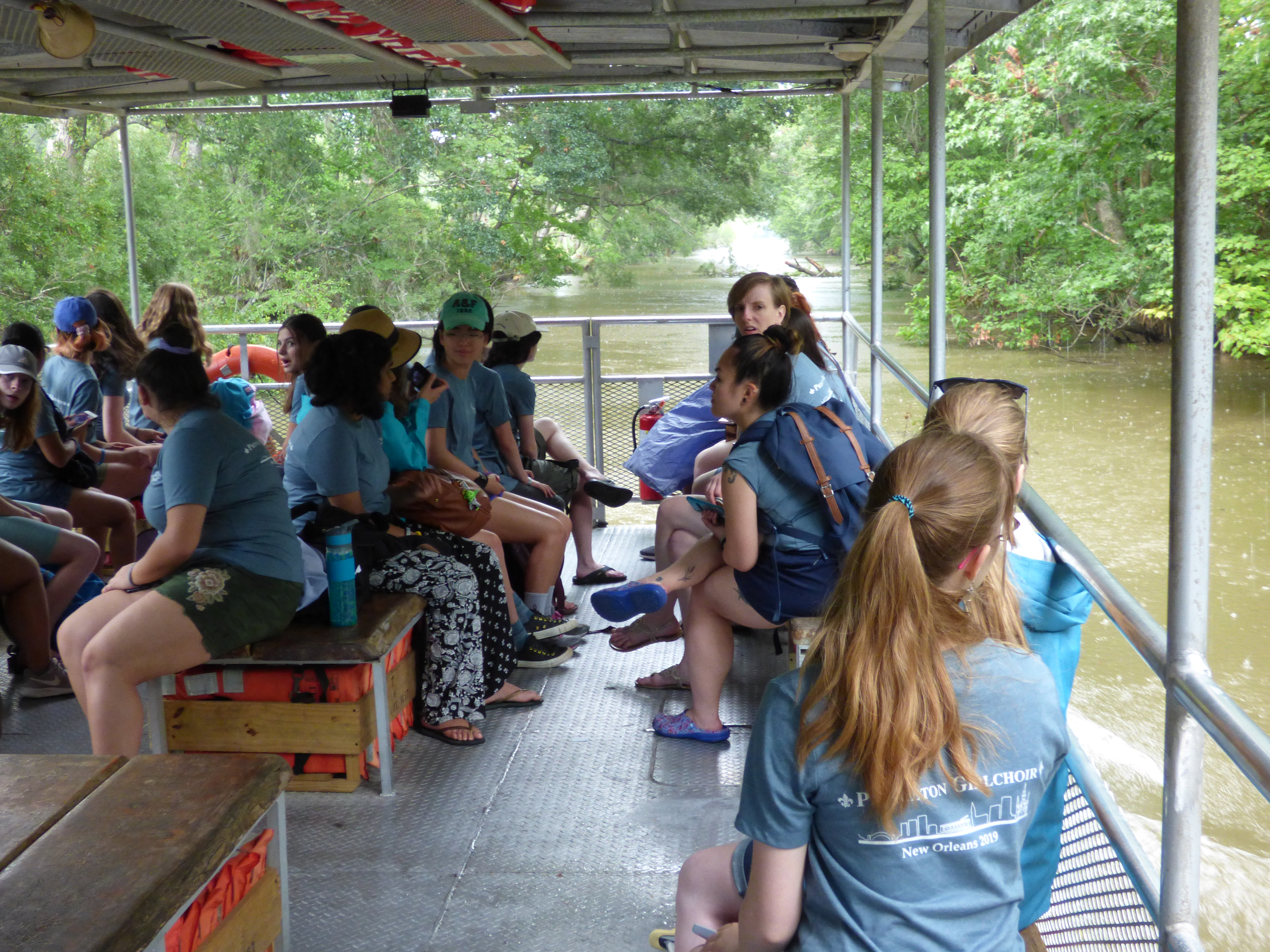 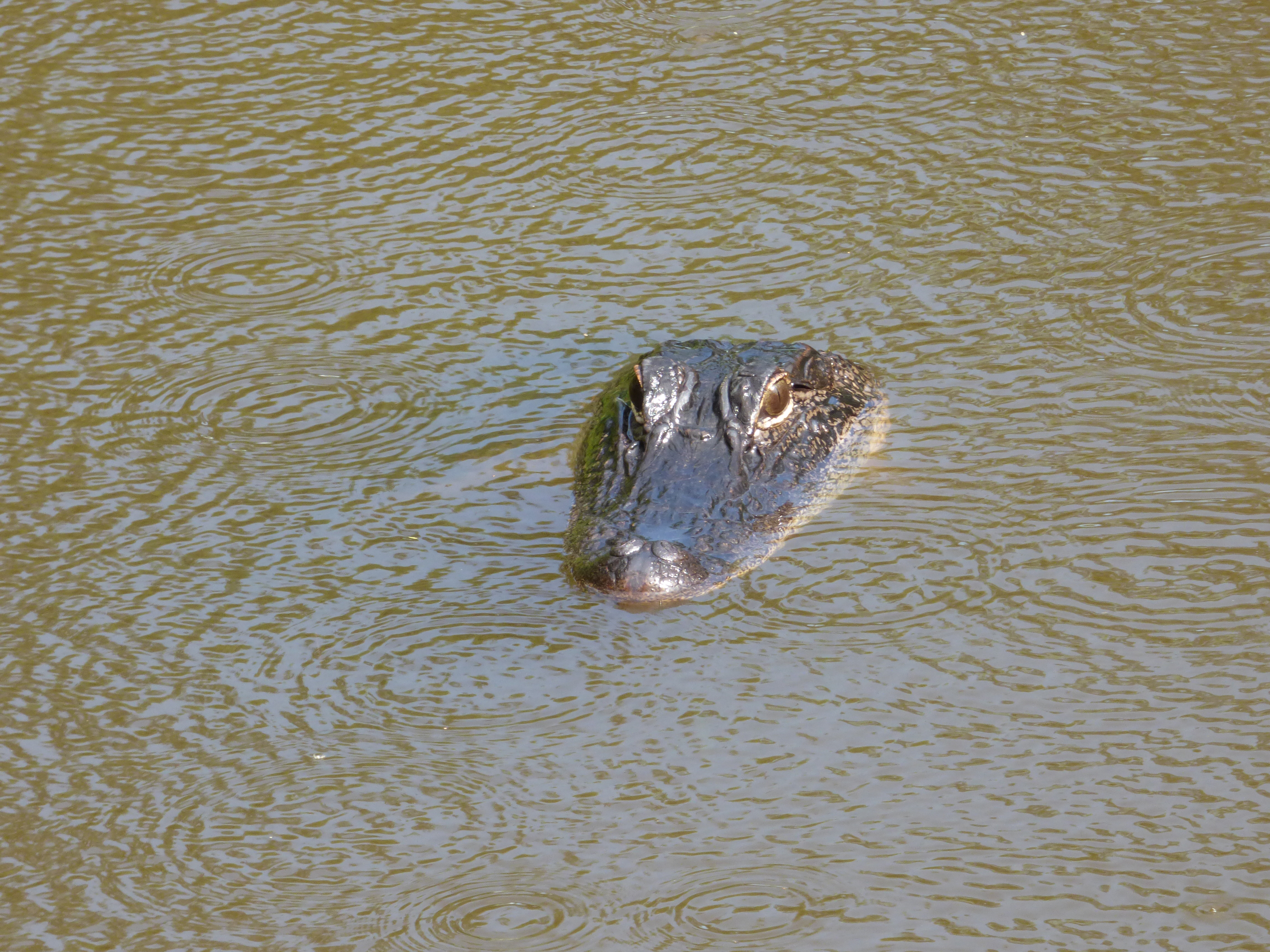 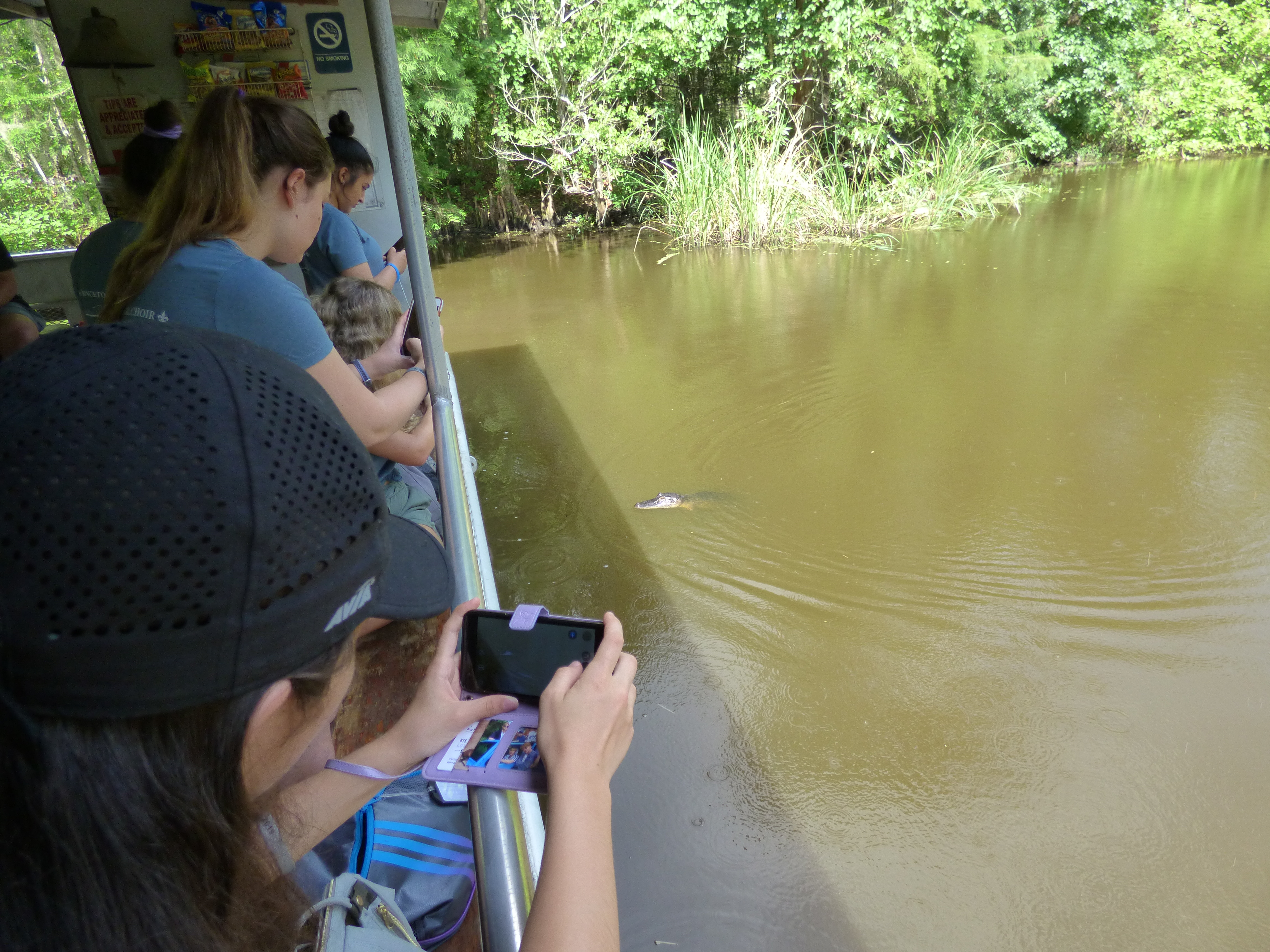 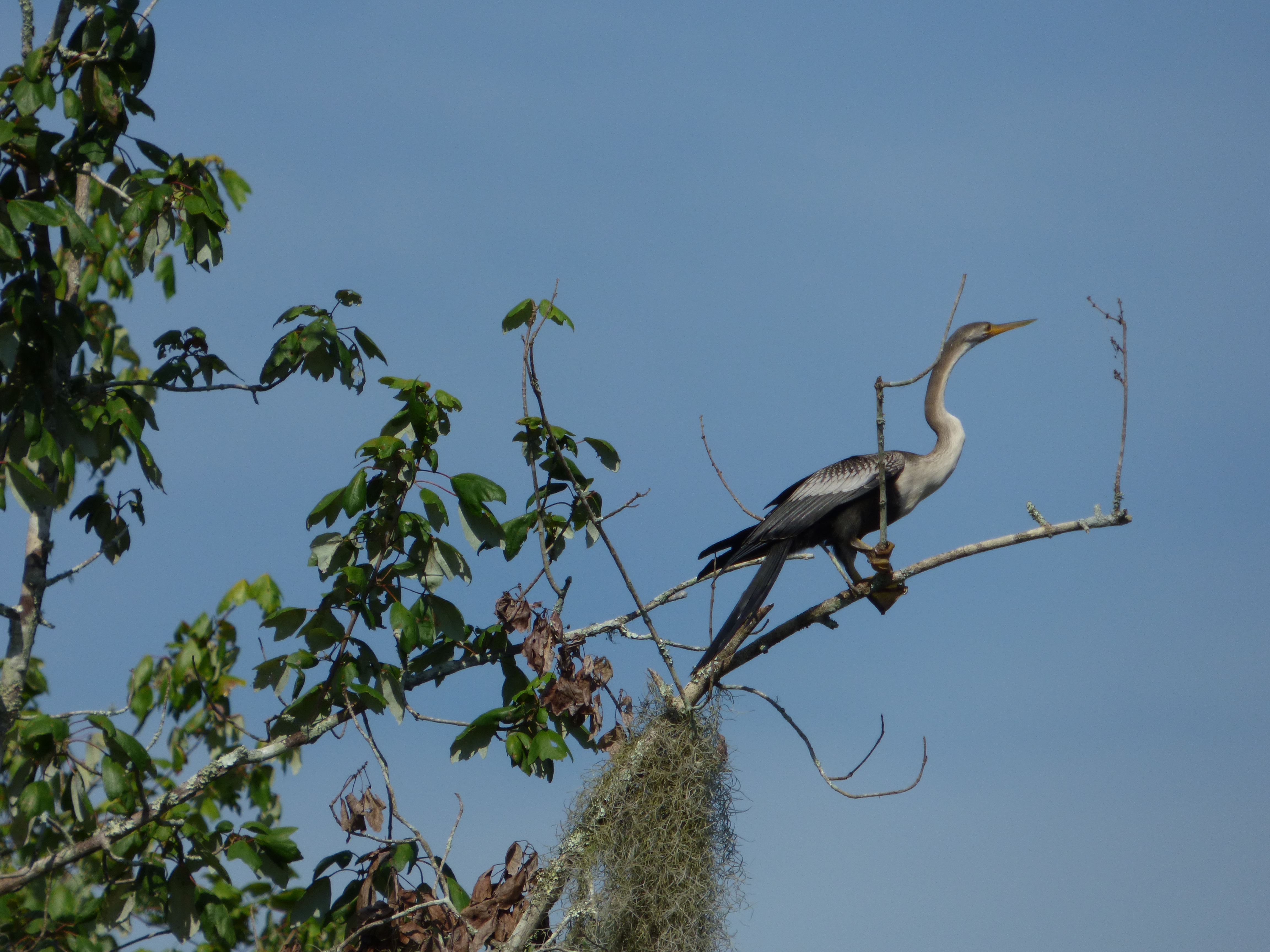 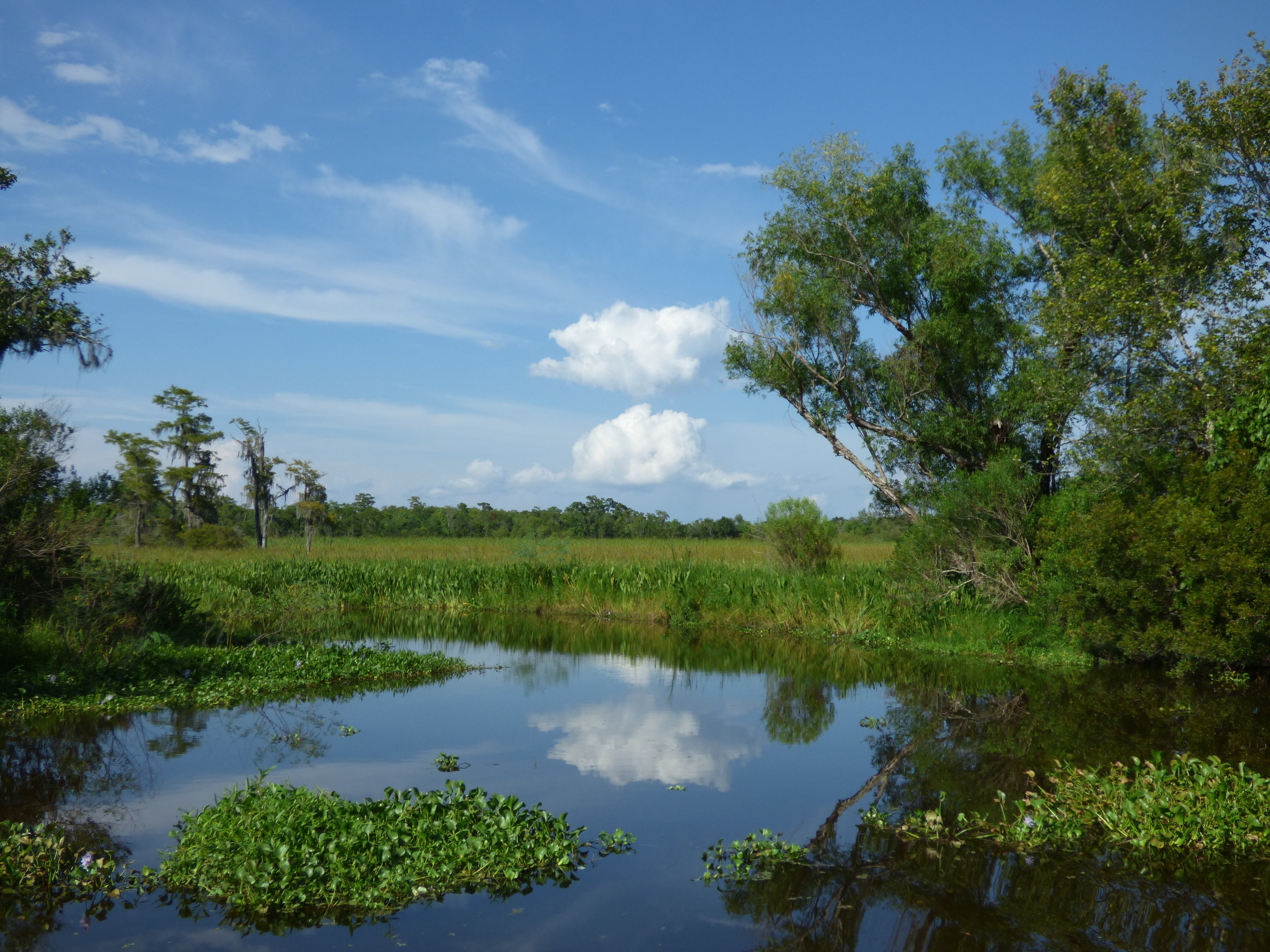 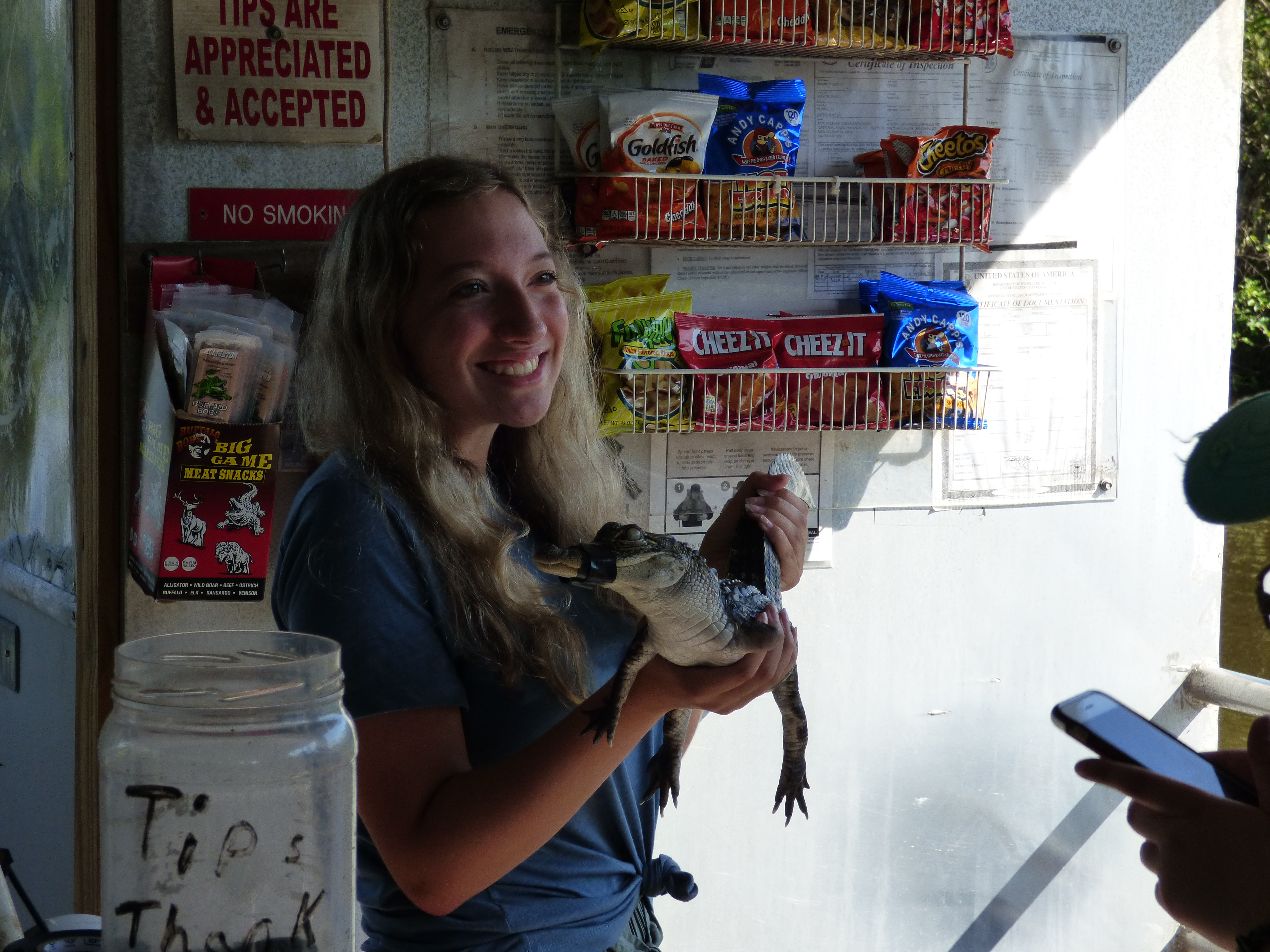 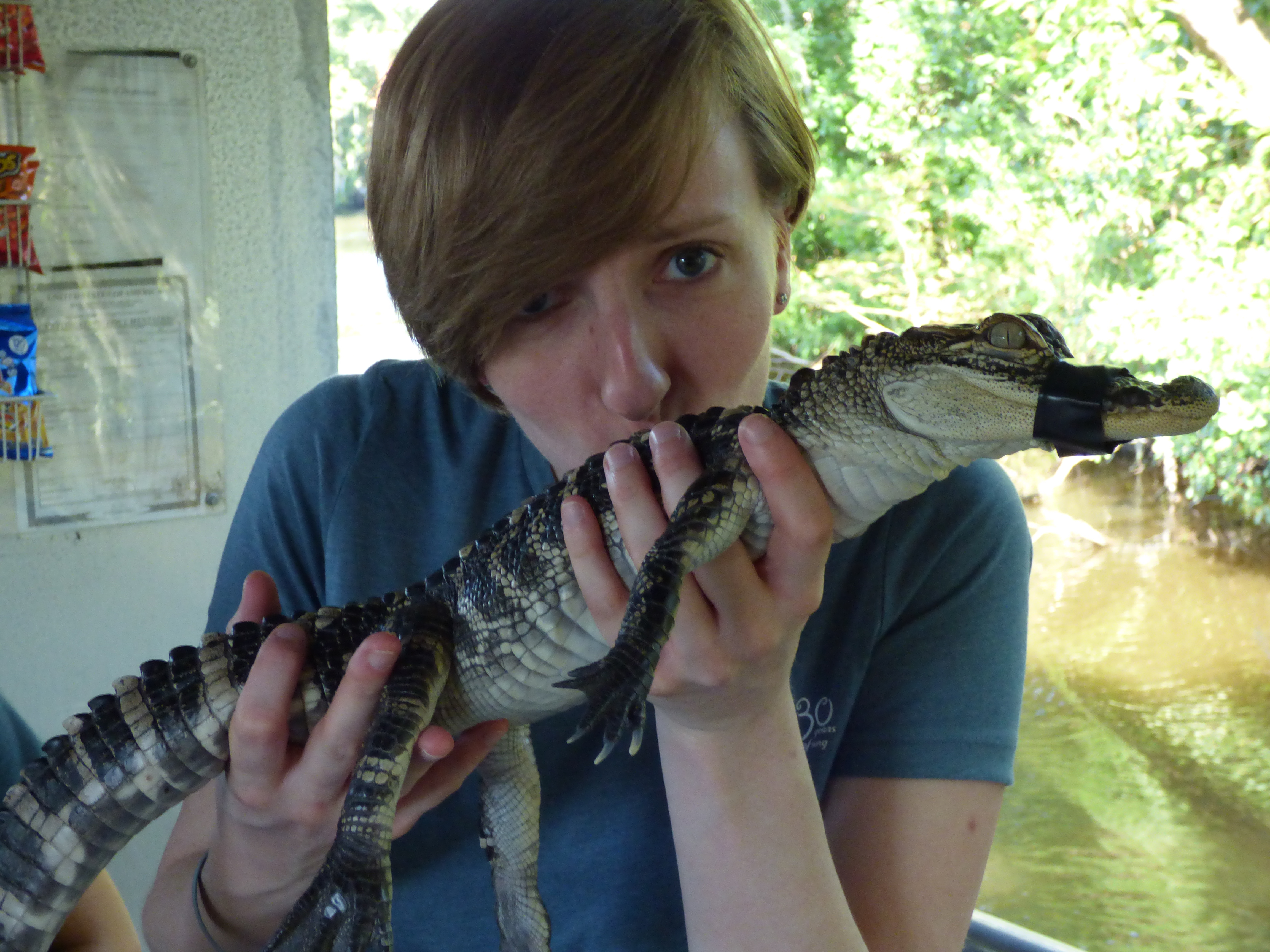 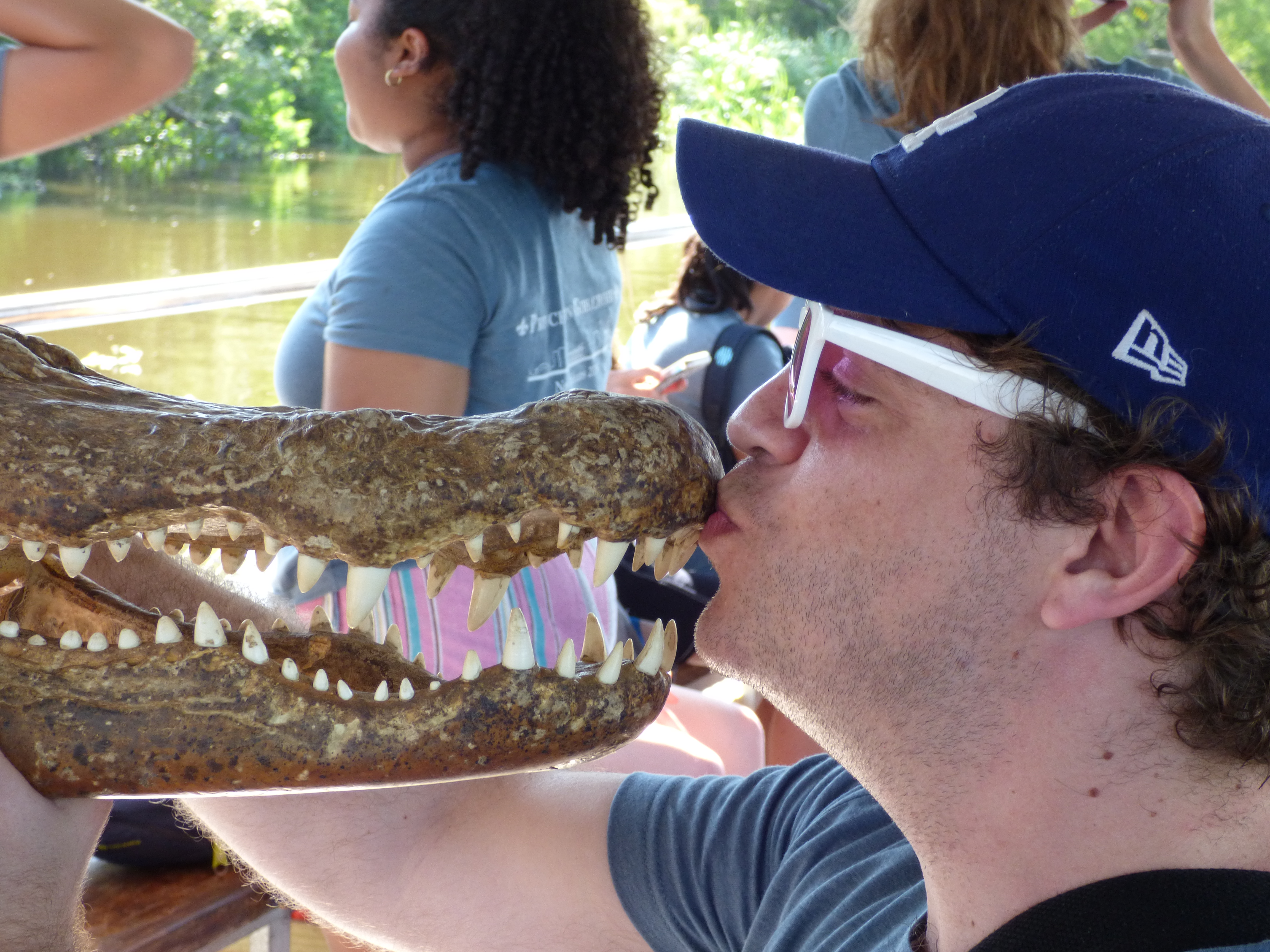 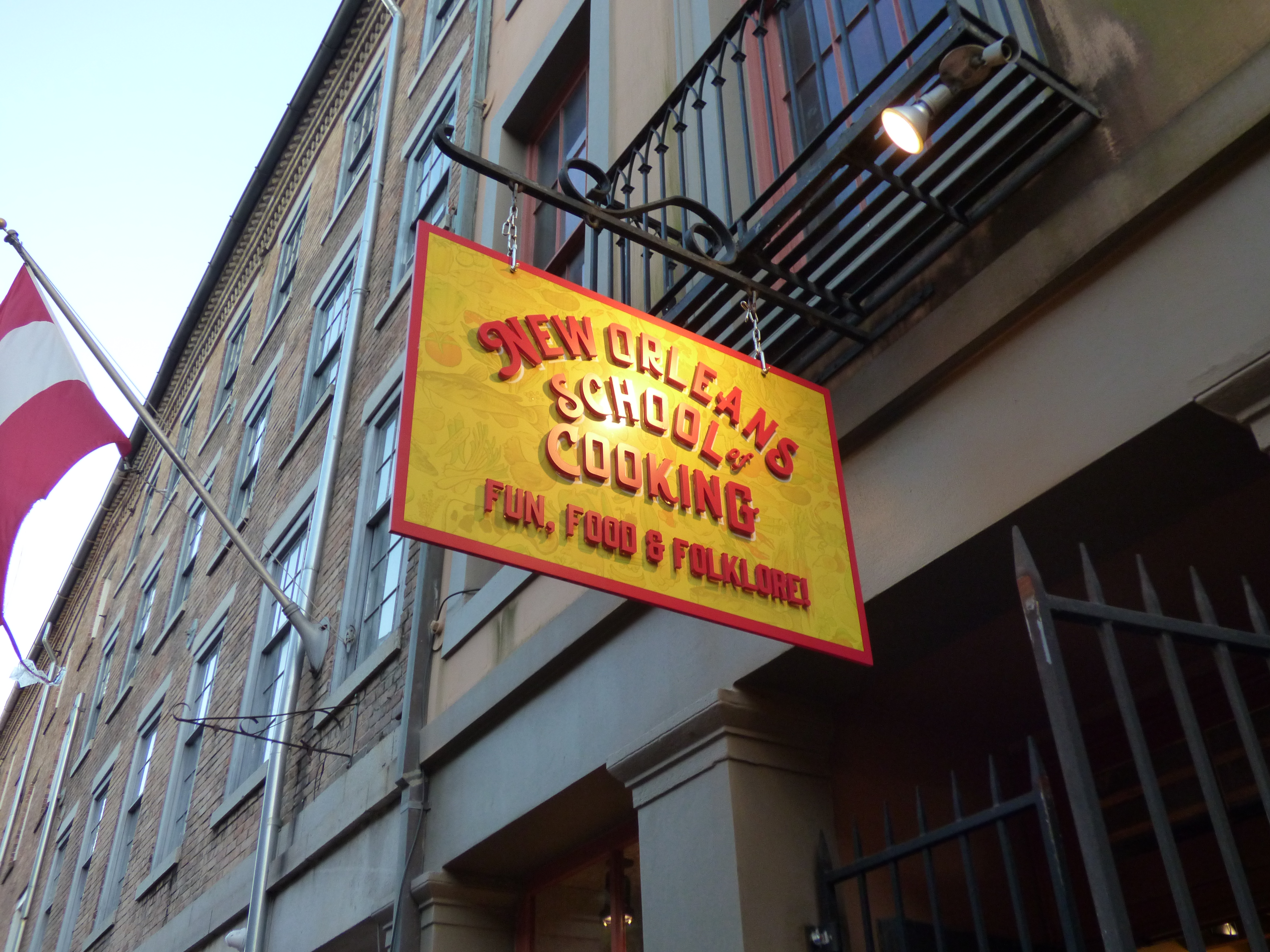 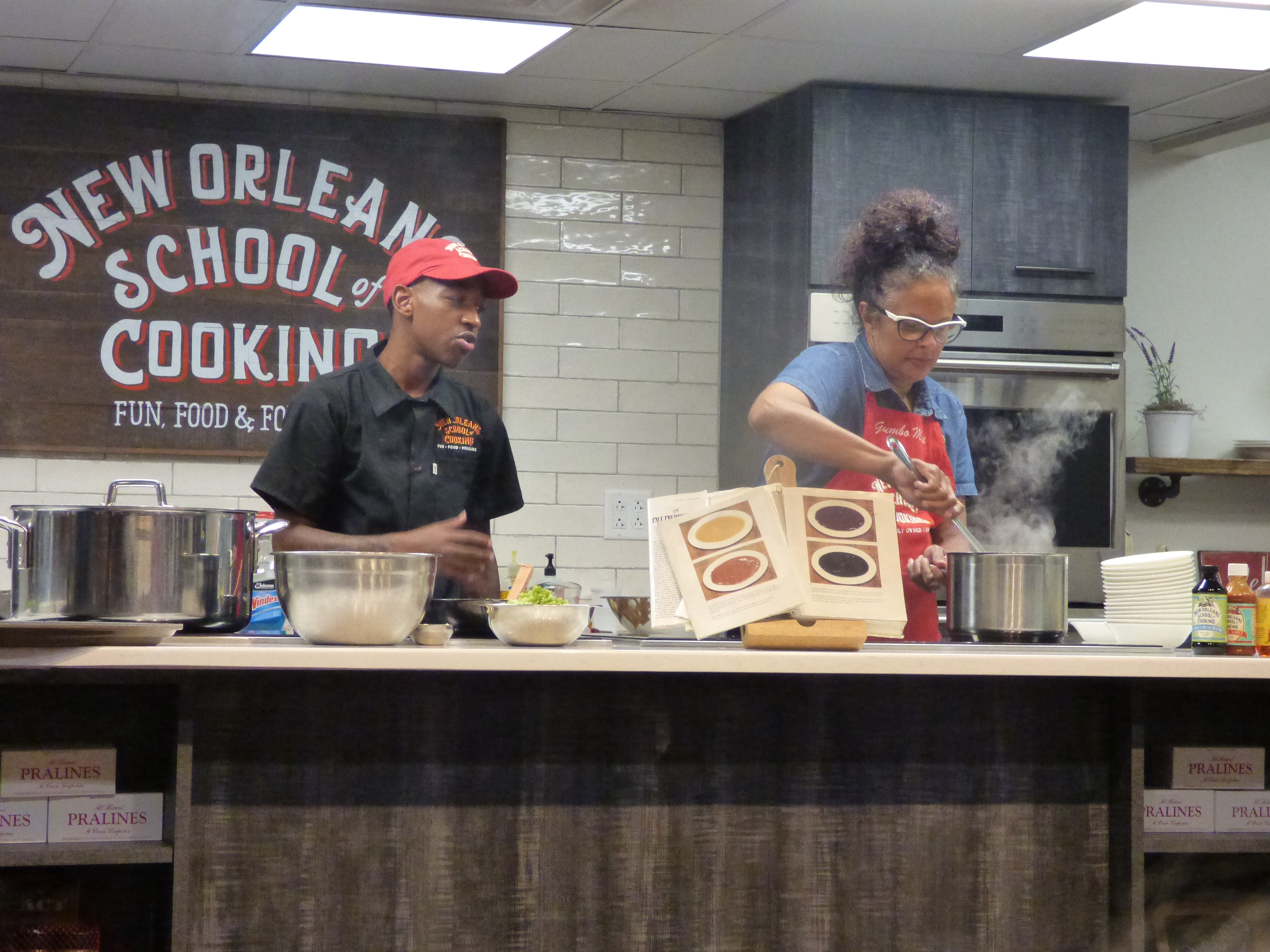 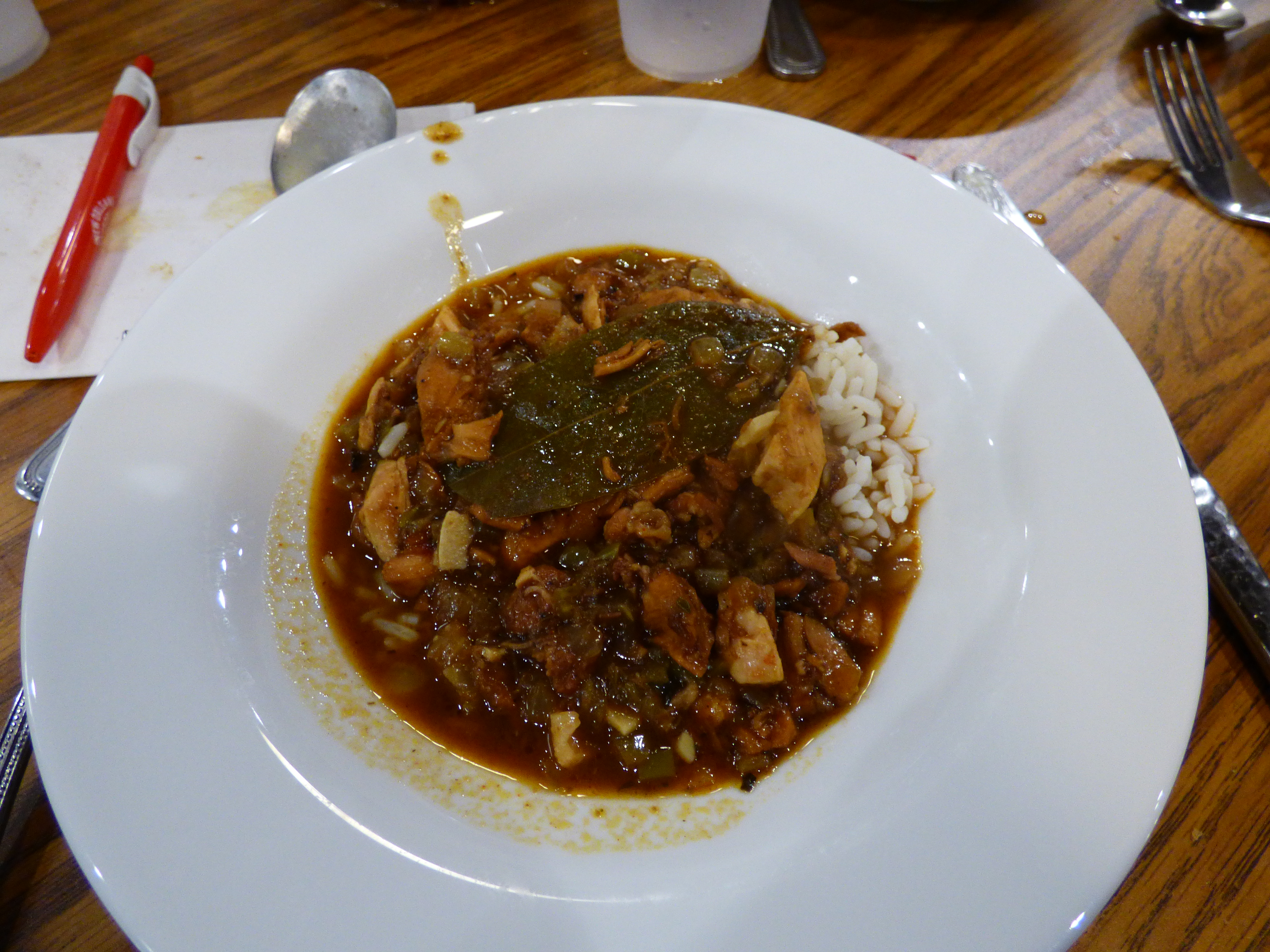