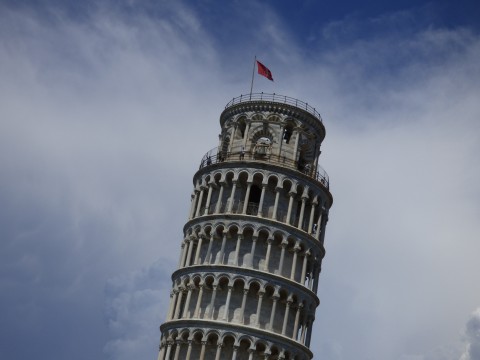 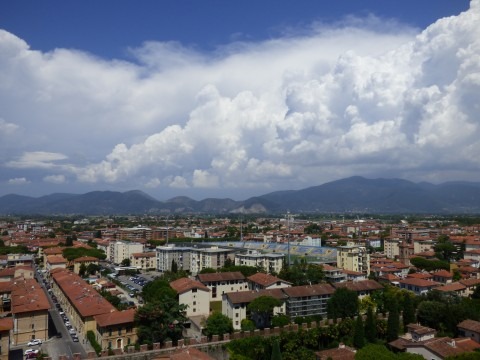 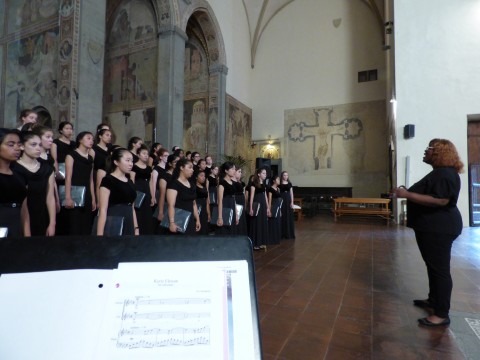 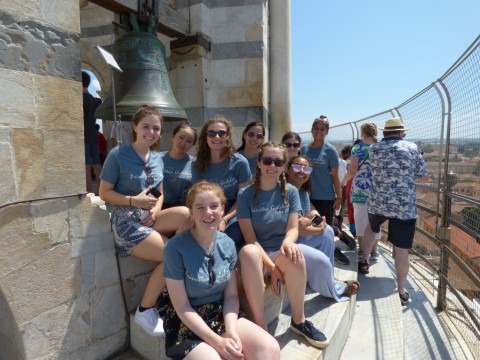 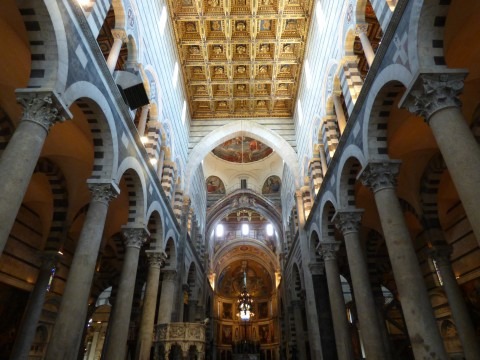 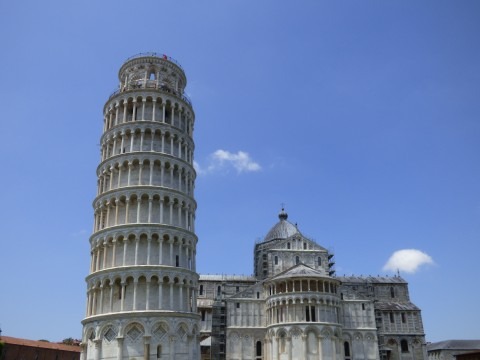 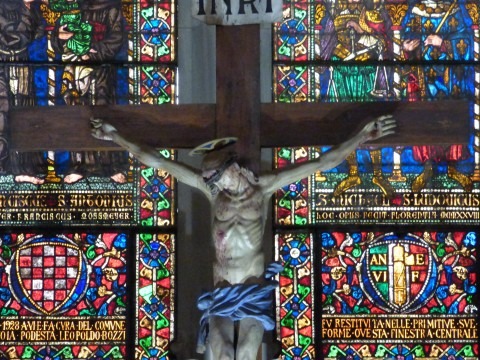 Good (late!) morning! Today we were able to sleep in because it’s another day of travel, so I definitely took advantage of the extra sleep. I hit my bed and passed out last night after such an exciting day!

We began the day by eating a lovely breakfast in our hotel, and then meeting together and getting on the buses at 9:15. We made the (relatively) short ride into Pisa, getting stuck in our first bit or really bad traffic in the commute–despite all of the crazy driving we’ve seen, yesterday was the first time we had seen an accident in the entire week we’ve been here! When we arrived in the bus parking lot, we were swarmed by the street vendors who prey on tourists by selling all sorts of contraband; our girls have gotten very good at saying, “No, we don’t want any.” One guy asked me if I wanted a belt, and I replied, “You’re a few days too late–I’ve already got one!” After taking another “pay to potty” break (.50 Euro again), we all split up into three touring groups with our local guides and made our way into the city to see the sights.

When we turned the corner and walked through the ancient walls, we were greeted with the sight of the Piazza del Duomo which featured the Duomo, the Battistero di San Giovanni, and–of course–the famous so-called “Leaning” Torre di Pisa. Let me tell you, it was a pretty amazing sight to see after years and years of seeing pictures and paintings. It’s been amazing seeing all of these famous sites on this trip, and the Leaning Tower did not disappoint. We had a brief tour of the sites and explanations of everything we were seeing, and then we were cut loose to find some lunch and wander around the city for three hours. Many silly selfies were taken, and it was nearly impossible to walk through the piazza without messing up someone’s shot–I know I felt very nervous walking around and being mindful of all of the posing happening in front of the tower, making for a few awkward exchanges–but everyone was friendly about it!

After wandering through the beautiful town and down to the river Arno, I got myself some pizza and gelato from “one of the top four ice cream stores in all of Europe” (according to our guide) I then headed back to the piazza to drop off my bags in the locker room and got in line at my allotted time to climb to the top of the tower. 18 Euros and 290 steps later–all of which you could feel the lean while climbing–we arrived at the top of the bell tower for an incredible view of the Duomo and surrounding areas. I have to admit, I felt a little bit nervous up there, very thankful for the added guard rails and fences that kept people from falling from the top. To top it off (ha!), we actually ran into one of the girls’ friends while we were up there (not planned!). Throughout this trip, we’ve been bumping into people we know: friends, classmates, teachers, and (in my case) students! It’s a small world, after all…

Sufficiently exhausted and sweaty (it was a scorcher yesterday!), some of us chose to visit the Duomo before we walked back to our bus and headed on to Pistoia, another cute little town close by to Montecatini, for a lovely family-style dinner before making our way onto San Francesco Church for a concert. We met with the other choirs for a brief collaboration (a choir of adults and a choir of young children) before putting on a beautiful show for an appreciative audience. As our tour guide Stefano quipped, “By the end of the concert, everybody loved you!” The children’s choir loved us so much that they invited us to go get ice cream with them after the show, but unfortunately we had to decline due to our tight travel schedule. Next time!

So that was our day! Today, we make our way up north to Milan. Until later, ciao!