Day 4: Apparently defenestration is a thing 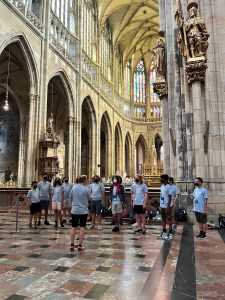 After another great breakfast here at our hotel (seriously, good breakfasts here!) we were off to the famous Prague castle grounds. Our local guide Joe was sweet as could be, if a little quiet, and treated us to a tour of the grounds, the Old Royal palace, St. Vitus Cathedral, and the Golden Lane. Everyone enjoyed watching the changing of the guards, and seeing the actual window they used to throw people out of (defenestration) was definitely a highlight – apparently no one died from it, just minor injuries. We even had a chance to sing in St. Vitus Cathedral!

From there, Joe walked with us down to the Charles Bridge, and on the way took us passed some interesting points of interest – including some provocative protest art in a quaint square outside the Kafka museum (don’t worry, nothing inappropriate, but it was definitely interesting!). Just as interesting were the tasty gingerbread biscuits we were treated to (thanks, Vieira-Roden family). 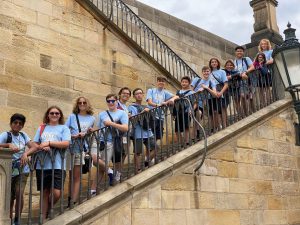 It was then finally time to walk across the Charles Bridge. On a Monday afternoon it wasn’t too crowded or crazy, we we had the chance to really take in the scenery. 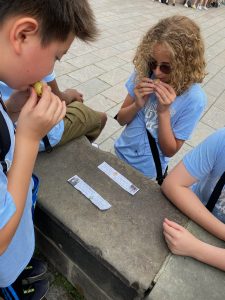 I’d also like to take this opportunity to apologize to those of you that are now going to have a ceramic flute living in your house. I’ve kind of gotten use to it at this point, if gives you hope. Honestly, the boys have had a great time playing them, but they’ve also been pretty good about keeping it under control.

By now we were DEFINITELY ready for lunch, so we split up into five (well-supervised) groups for lunch and a bit of free time in Old Town. Most of the boys chose to spend some of their free time supporting our our festival-friends the New York Children’s Chorus by attending their afternoon concert. 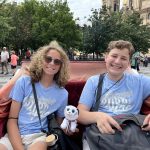 In the remaining time, there was ice cream, and meandering, and even a carriage ride.

That might sound like a full day, but we still had a 3-hour rehearsal ahead of us! We all got a second wind when (after a snack), we entered Dvorak Hall for the first time to see the Czech Philharmonic hall. It’s a gorgeous space, and we’re excited to get to sing there tomorrow night. Everyone worked hard with Dr. Dilworth, learned a lot, and by the end the choir was sounding really good – just one more rehearsal tomorrow for final polishing and memorization before the Gala Concert.

And finally, it was dinner time. The super nice directors decided to invite the kids to mix and mingle, sitting not just with their own choirs, but making friends with the other kids in the festival choir. That was a hit! Maybe a little too much of a hit, since Dr. Dilworth asked us to save our voices, but that was really hard to do in such a fun environment. Dinner was a little adventurous for some (salmon or veggie burger for the vegetarians), but I was proud of well then did. We were rewarded with a really yummy chocolate crepe for desert.

By the time we finally got home, it was already after 10pm, so we sent everyone off to bed immediately – luckily we get a slightly later morning tomorrow, so we should get some good rest before the big night!

You can catch more pictures and a few videos from our adventures on our SmugMug page (check yesterday’s post for more access instructions).dd