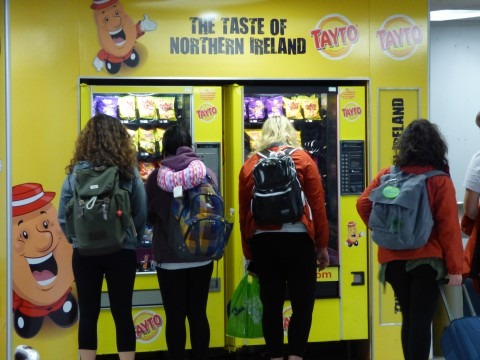 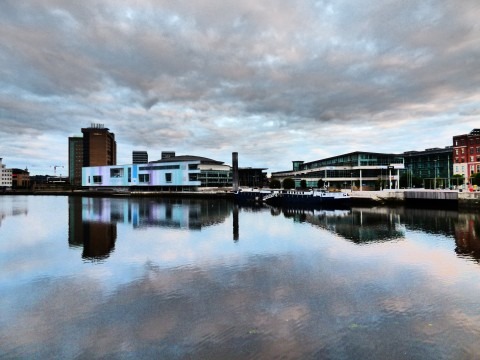 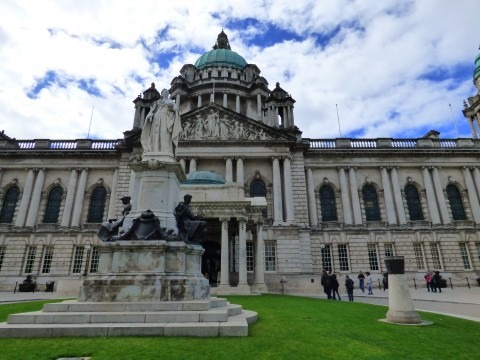 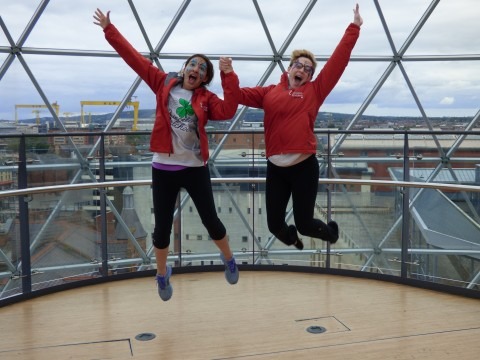 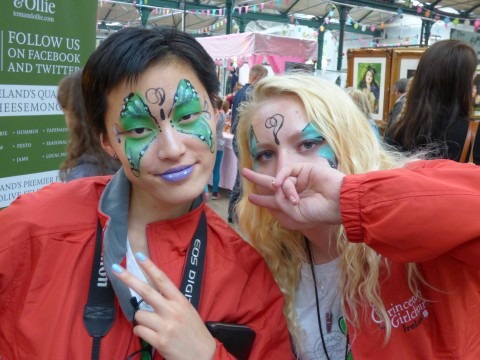 As I finally find myself sitting at the desk in my hotel room in Belfast, I’m really quite confused as to what day of the tour we’ve just completed. I think if I just call it “Day 1.5”, it would be accurate. In any case, I’ve now been up for nearly 36 hours and I’m a tad worried that this post might not make as much sense as it should. Please accept my apologies if this sounds like the ramblings of a very exhausted man…

So yes–we’ve managed to find our way to Northern Ireland! We survived the insanity of the United Airlines ticketing counter (if you could come up with the most convoluted and inefficient way to get our girls their boarding passes and tag all of their luggage, they NAILED IT!), a not-so-difficult time at the TSA checkpoint, and I even managed to spot a couple of celebrities (a certain wild-eyed character actor from “LOST” and his equally talented wife were snacking on some delightful tacos in Terminal C)! We all enjoyed ordering food with the iPads in the food court, and may or may not have stolen some fruit (if it doesn’t have a barcode, how are you supposed to pay for a banana when no one will help you?!) along the way. In any case, Terminal C was a hit as far as airport terminals go. 10/10 would wait for a plane there again.

We excitedly boarded our plane, and managed to totally confuse our flight attendants with our penchant for trading seats once we’ve boarded. After sorting all of that out, we sat back, relaxed, and enjoyed a 6-hour flight. Many of us took advantage of the on-board entertainment–many of us watched movies, TV shows, and even had a few cut-throat multi-player checkers matches! We also enjoyed a lovely (well, I enjoyed it at least) dinner, though the second round of drink service was disrupted by a pretty wild bout of turbulence that lasted a little bit longer than some of us would have wanted it to. After the excitement, we all did our best to get at least a little bit of sleep. Before too long, we had breakfast and coffee on our tray tables and were flying into Belfast–even making out some sheep in the pastures as we made our final descent. Yes, the sheep were very exciting–because they were IRISH sheep!

We made our way off the plane and into passport control, followed by a trip to what must be one of the world’s longest luggage carousels. Many of took advantage of the time it took the luggage to make its way around to use the restrooms (which were FANCY for airport bathrooms!), indulge in some candy from the delightfully stereotypical “Tayto” vending machine (featuring a sweet, cartoon potato wearing a hat, white gloves, and black shoes), and–exciting to me–trying some Coca Cola “Life”. We’re still not sure what makes it different from Coca Cola, Diet Coke, or Coke Zero, but I felt like I was really alive when I drank it! So there’s that, I guess.

Once we had all of our luggage, we met our tour guides, got on our tour buses, and made our way through the countryside to Belfast. Our guides talked a little bit about Ireland and Northern Ireland (and they had IRISH ACCENTS, which was enjoyed by many of the girls), including vital statistics about the two jurisdictions. We all found it a little bit confusing that even though both Northern Ireland and The Republic of Ireland are both considered part of Ireland, NORTHERN Ireland is part of the United Kingdom and the Republic of Ireland is part of the European Union. That means that while we are staying in Belfast, we will be using Pounds Sterling; when we travel to Dublin, we will be using Euros. Also, everyone in both Irelands speak English–even if you can’t understand what they’re saying. But sometimes they also speak Irish. It’s all a little bit confusing, but I’m sure with some more tours in the coming days, everything will start to make a whole lot more sense.

Once we entered the city, we were dropped off in front of City Hall and had a few hours to wander around the city and take in the sights. The girls were eager to find some lunch, making our way over to the wonderful St. George’s Market. This place was amazing–many artists, food stands, antique vendors, live music, a CHOCOLATE FOUNTAIN, and face painters made this a must-see destination for most (if not all) of us. We picked up a lot of food, including samplings of fudge, fried potatoes, crepes, etc. A highlight of the day was when a whole bunch of us got our faces painted. Yes, I did indeed say “us”. I am included in that bunch. All of the girls got lovely, sparkly butterflies painted on their faces…and so did I. I guess that is what happens when I let them decide what the face painter should paint on me. I asked the artist, “Is it safe for me to walk around town with this on my face?” She responded, “You’re fine in Belfast–but don’t go to any small towns.”

Many of the girls opted to visit the Victoria Square shopping mall, which features a beautiful glass dome. You are able to take a whole bunch of spiral staircases up to the top for a lovely panoramic view of the city. Some of the girls also made their way down to the waterfront (the River Lagan meets Belfast Laugh) to see the “Beacon of Hope” sculpture–A.K.A. “Nuala with the Hula” or “Thing With the Ring”, as well as viewing the giant cranes “Samson” and “Goliath” at the shipyards where the Titanic was built. We all made our way back to City Hall, which features some amazing bathrooms (or so I’m told) to get back on our buses and head to our beautiful hotel.

After getting our keys, some girls went swimming, and some girls rested–though we were highly discouraged by Ms. Butler from taking naps so as to avoid serious jet lag. We got dressed (some of us washing off our face paint beforehand, some of us not) and headed down to a lovely three-course dinner: Potato and Leek Soup or Caesar Salad, Salmon or Chicken with vegetables, and finally Cheesecake or some chocolate-covered amazingness–with vegetarian and gluten-free options included, of course. Needless to say, the girls seemed pretty satisfied with dinner before heading to a short rehearsal and then upstairs to get ready for their 10PM lights out.

I took advantage of the long daylight hours (lots of sunlight at night up here in the north country!) to take a nice walk through the city to work off the caloric intake of the cheesecake, enjoying more of the sights of this beautiful city. When I arrived back at the hotel around 10:30, it still wasn’t dark. I’m hoping the girls realize that they have sliding wood panels in their rooms to block out the sun, or else they might find it difficult to go to sleep at the assigned time (because we all know they go to sleep right away after lights out!). I know it’s messing with me–that’s why I’m up writing this so late! Even though I’ve been up so long, the late sunlight is really screwing with me.

So that was today/half of yesterday! We have our first festival rehearsal tomorrow, as well as some more touring of the city. Should be fun! Until tomorrow night, goodnight!