JOIN US THIS FALL! 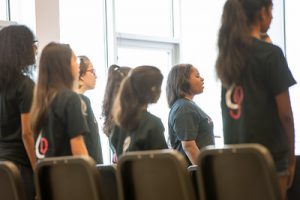 For two local organizations that focus on young musicians, the future is now. Three concerts to be performed this weekend, by the Youth Orchestra of Central Jersey (YOCJ) and the Princeton Girlchoir, will demonstrate that music is shaping tomorrow today.

Jennifer Montone will be the soloist for the Symphonic Orchestra concert, performing Emmanuel Chabrier's "Larghetto" for horn and orchestra. Montone is the Principal Horn of the Philadelphia Orchestra. She also teaches at the Curtis Institute of Music and the Juilliard School. Her recording of Krzysztof Penderecki's Horn Concerto with the Warsaw National Philharmonic was the recipient of a Grammy Award in 2013.

On March 14, Montone will visit West Windsor-Plainsboro High School North to conduct an interactive master class with students and brass ensembles. The master class is free and open to the public.

"Every year it has been our goal to get a high caliber professional artist to come in and be our soloist and to do a master class for the student musicians," says Larisa Epps, President of the YOCJ Board of Trustees. "Mostly we've gotten players from the Philadelphia Orchestra. One year, we had a flutist from the New Jersey Symphony. It's been a nice relationship. We also take the kids to see a Philadelphia Orchestra concert once a year."

YOCJ was founded by Portia Sonnenfeld in 1978 as a preparatory orchestra for the Mercer County Symphony Orchestra (now the Greater Princeton Youth Orchestra). Over 200 elementary through high school students make up the orchestra and its performance groups, including two levels for strings, advanced symphonic orchestra, and small ensembles for brass, percussion, and woodwinds. Auditions for new students are held in January, June and September. The next auditions will be held on Jan. 24.

"I'm also a violinist, a private teacher and a mom of children in YOCJ, so I've been a big fan for many years," Epps says. "I've been sending my own private students since 2004. I find it very rewarding, because it's such a worthwhile organization."

Also on Sunday evening, the Princeton Girlchoir will take to the stage at McCarter Theatre Center's Matthews Theatre for its winter concert, "United in Song." The program will bring together the organization's six choirs, which range from the youngest beginners to the most polished pre-collegiate singers.

"Lynnel Joy Jenkins, as the artistic director, will be leading two of the choirs, as well as the combined pieces," says the organization's executive director, Hilary Butler. "Then our three associate directors, Melissa Keylock, Fred Meads and John Wilson, will also be conducting."

According to Butler, the program will include a "wide variety of selections, from classical to folk songs and spirituals, as well as contemporary."

The Princeton Girlchoir offers choral education for girls from grades 3 to 12. The choir was launched in 1989 by Jan Westrick, who retired in 2009 after 20 years of dedicated leadership. What began as an after-school activity for girls with an interest in choral music blossomed into the area's premier training and performance choir for girls.

Through weekly rehearsals, the choristers strive toward a common goal to create a mellifluous ensemble sound. In the process, the singers grow as musicians and individuals, all the while sharing their love of music. The result is not only beautiful music-making, but the kinds of bonds and strengths associated with a positive and memorable team experience.

"This is the largest the choir has ever been," Butler says. "We're excited to have nearly 300 girls who are singing with us this year, and we've invited alumni from around the area to join with us for the concert. Every year, we do at least one work that combines all of our choristers. This year it's a lovely arrangement of 'Bridge over Troubled Water.' As well there's our traditional winter piece that we sing, Benjamin Britten's 'New Year Carol,' when we invite all of the alums in the audience to come up and join in."

What: Winter Concert, "United in Song."

JOIN US THIS FALL!