A day of Titanic proportions! 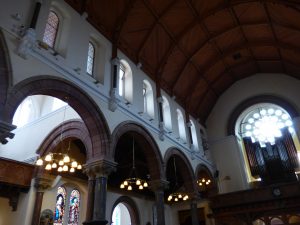 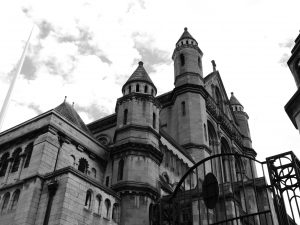 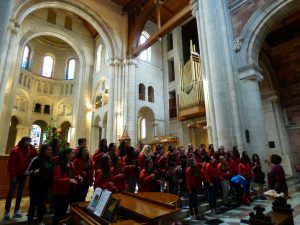 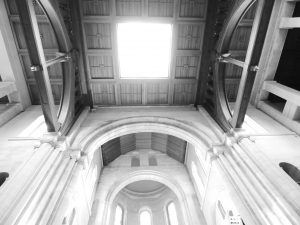 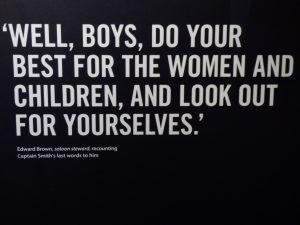 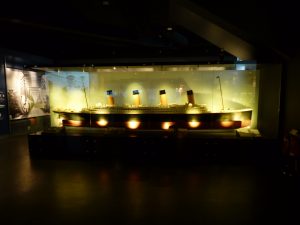 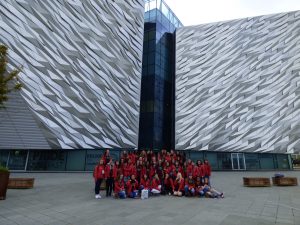 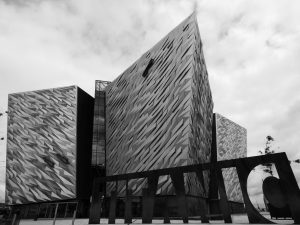 Now that we're all a little bit more rested, I suppose you'd all like to hear about yesterday's activities! Well then, here you go!

After another delightful breakfast at the hotel, we made our way (maybe SLIGHTLY less groggy than the previous day) to our bus and headed down to the waterfront. Our first destination of the day was the Titanic Belfast museum, which was an amazing sight to behold. The ultra-modern building was designed to reflect the city's history of ship making, with the building being as tall as the Titanic's hull. Inside, we were treated to a fascinating exhibit that not only focused on the Titanic, but also the industrial history of Belfast. It was very interesting for all of us to learn about how the ship was built, from planning to actual construction. Many of the girls took a ride that took us through a simulated shipyard, learning about the conditions that the ship builders endured–and concluded that we would not have fared well in that line of dangerous work.

Of course, a large part of the museum was dedicated to the sinking. It was extremely poignant to hear actual survivors talking about their memories of that night, as well as reading distress messages sent via morse code which were displayed. I had a particularly difficult moment when looking at an interactive exhibit about the people who were on the Titanic when it sank, listing both those who died and those who survived. You could narrow things down by age groups, male or female, survived or perished. When I came across name of a young child who perished, aged 4 months, it really hit close to home (I have a one-year-old at home) and I was unable to continue at that particular exhibit. Suddenly the tragedy became a bit too real for comfort. We tend to view the Titanic and its sinking in a very romanticized way, but I think after this exhibit we all left with a new view of how things were and the scope of the tragedy.

After posing for some group shots in front of the museum, we headed to St. Ann's Cathedral for our first performance of the tour. We had a dress rehearsal to familiarize ourselves with the acoustics of the space (and it was a FANTASTIC space in which to sing!), and then headed behind the scenes to change in to our concert dress. After some issues with locking doors (we managed to find a way around this involving shoes–mine included), we were all changed and headed back into the sanctuary for the concert. Though the audience was small (who goes to a concert at 1:15PM on a Tuesday?!), they were appreciative of our beautiful performance. When the concert was over, we changed back into our street clothes, boarded our bus, and went to the center of the city for a well-deserved lunch break.

When we had all filled our stomachs (some more than others–Ms. Jenkins was in awe of my Peanut Butter Stack dessert!), we got back on the bus and made the short trip to St. Patrick's for our second festival rehearsal. I should note that something happened at this rehearsal that has never happened to me in my entire life–we had a 10-minute "corpse delay". Being in a church, our rehearsal did not supersede church business, and so we had to stop for ten minutes of absolute silence while a casket was carried in on the shoulders of the pall bearers. I'm sure some of the girls might have been a bit put off by this (for the creepy factor), but it was actually sort of interesting to see the funerary practices of a different culture. Once we got the "all clear" it was back to rehearsing for the next two hours.

We then headed to the Villa Italia for dinner with the other festival choirs. Everyone being so sociable, I'm hoping the girls didn't realize how long it took us to get our food after ordering. I'm not exaggerating when I say that my dessert arrived two hours after I had ordered it. The girls actually seemed more worried about certain logistical concerns: "Ms. Butler–our curfew is 10PM, but it's about 10PM right now. What are we supposed to do?" Fortunately, curfew was changed to a time later than when we finished dinner, much to the relief of many of the girls.

Tonight we will be having our first festival gala concert, so we are awfully excited. I look forward to summarizing today's events (hopefully) later tonight. 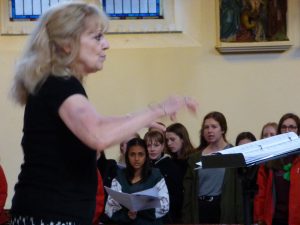 Menu
PrevPreviousCheck back in the morning…
NextGoodbye, Belfast; Hello, Dublin!Next